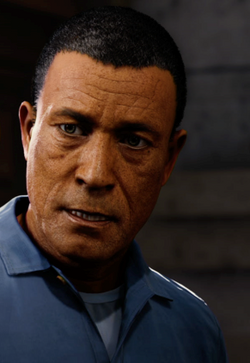 Dr. Michaels was a specialist in hereditary genetic diseases. He was hired by Oscorp to lead and perfect the GR-27, a serum created to serve as a cure for many incurable genetic diseases. When the first tests proved disastrous and the GR-27 was deemed dangerous to the populace, the only sample of the serum (which gained the nickname "Devil's Breath" from the lab technicians) was entrusted to Michaels, who kept it with himself on a briefcase at all times.

Due to him possessing the only existing sample of the Devil's Breath, Dr. Michaels became the primary target of the Demons, a terrorist organization led by Mister Negative, and later Doctor Octopus. With both villains aiming to use the Devil's Breath on their own personal vendettas against Norman Osborn.

When the Devil's Breath was released on the city, Dr. Michaels was responsible for mass-synthesizing its antidote.[1]

Like this? Let us know!
Retrieved from "https://marvel.fandom.com/wiki/Morgan_Michaels_(Earth-1048)?oldid=6060056"
Community content is available under CC-BY-SA unless otherwise noted.