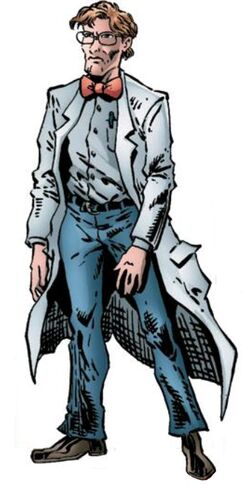 There are new technologies discovered practically every week.

Morley Erwin was born and raised in Columbus, Ohio. He attended M.I.T. gaining a masters in electrical engineering.[1]

Morley Erwin was an employee of Stark International and later Stane International, and friend of both Tony Stark and James Rhodes. When Stark was battling alcoholism, Rhodes took on the mantle of the superhero Iron Man, with Erwin's scientific help, as well as that of his sister, the equally gifted Clytemnestra Erwin.[2]

When Stark International was taken over by Stark's enemy and business rival Obadiah Stane, Erwin and Rhodes resigned from the now renamed Stane International. Later, to help Stark get back on track, the Erwin's joined forces with him to set up the electronics company Circuits Maximus.[3] The company operated successfully for a while, until it was targeted by Stane, who bombed their building, killing Morley.[4]

Morley was a gifted scientist, specializing in electrical engineering and electronics. He became skilled in working on the various Iron Man armors.

Like this? Let us know!
Retrieved from "https://marvel.fandom.com/wiki/Morley_Erwin_(Earth-616)?oldid=5521615"
Community content is available under CC-BY-SA unless otherwise noted.