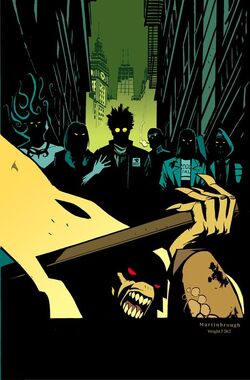 These Morlocks were a group of mutants who saw themselves forced to abandon their normal lives due to the emergence of a government-sponsored anti-mutant hysteria, beginning a new life in the sewers of Chicago.

They joined forces with the objective to protect each other, and became sort of a support group so each member could carry out a deed they had pending in the surface for seven minutes, the time it took for Sentinels to detect mutant presence.

After discovering that Litterbug had been employed in the creation of a giant mutant-hunting robot, the Morlocks attacked the main Sentinel base in the city, using one of these robots as a Toryan horse. The mission was successful, despite the death of one of their members, and the Morlocks decided to leave the city and part their ways.

Retrieved from "https://marvel.fandom.com/wiki/Morlocks_(Chicago)_(Earth-616)?oldid=5548843"
Community content is available under CC-BY-SA unless otherwise noted.