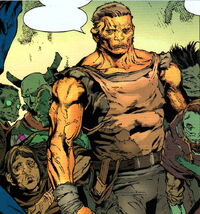 Base of Operations
Morlock Town, beneath New York City
Affiliations

The Morlocks are an underground mutant community living beneath New York City in a chamber connected to the sewer system, called "Morlock Town". The Morlocks have no desire to be part of the human society, given their inhuman features, and they consider groups like the X-Men as the surface world's pet mutants. The Morlocks planned to be ready for the upcoming war between mutants and humans, growing their food in hydroponic gardens to make themselves as self-sufficient as possible, as well as choosing their leader out of strength, not skill. Hence, they tested each new arrival in combat to ensure their worthiness to join. They used to be led by the superhumanly strong Sunder, who also possessed a fast healing factor. Other members included Callisto, a woman who hides a tentacled monster beneath her eye patch; Sparks, a young girl whose power to generate natural electricity powered the Morlock compound; Caliban, who could transform into a hulking monster; Leech, who could block other mutants' powers; and Pyro, who could generate and control flame. Despite the Morlocks' hatred for the surface world, Pyro respected the X-Men, and after hearing of the murder of Charles Xavier, the X-Men founder, he abandoned the tunnels to join them and avenge his idol, ending up in battle with the Friends of Humanity. The police arrived, and before they could try to arrest Pyro, he was teleported away by Nightcrawler, a former X-Man who had left the team in disgrace. Seeking to start a new life after his personal conflicts with the X-Men and the people he had let down, Nightcrawler listened with interest as Pyro told him of the Morlocks, and after they parted ways, Nightcrawler went down into the sewers to find them. Meanwhile, the X-Men disbanded after Xavier's death, and his former students were now in charge of Xavier's school. This new team wanted to open their doors to all available mutants, and they sent their newest recruit, Toad, who had told them of the Morlocks' existence, into the sewers to pass on an invitation to return to the surface as part of their school.

Retrieved from "https://marvel.fandom.com/wiki/Morlocks_(Earth-1610)?oldid=5548851"
Community content is available under CC-BY-SA unless otherwise noted.