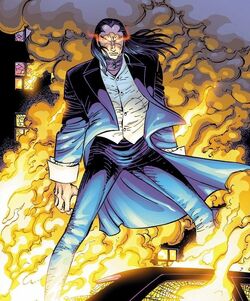 What was that? The Spider-Bride. There you are. The spinner at the center of the web. It's time. The Great Hunt begins. From this moment on, let all Hell break loose!

In the distant past, Morlun and his family took part in a battle against the Master Weaver and succeeded in capturing it and using its power to travel between dimensions and hunt all Spider-Totemic avatars.[3]

At some point in the past, Morlun travelled to Earth-616 and hunted a Spider-Totem named Ezekiel Sims, who managed to elude him. Ezekiel would go on to compile research on Morlun and take measures to protect future generations of Spider-Totems, such as Cindy Moon and Peter Parker, explaining the totemic side of their powers, warning them about Morlun, and attempting to take them into protective custody.[4]

After Peter's meeting with Ezekiel, Morlun and his hapless minion Dex subtly began tormenting Peter from the shadows, stalking him and wreaking havoc with his spider-sense. Morlun finally revealed himself when Spider-Man was investigating a fire at the wharf, punching him with what Spider-Man claimed was the hardest punch he had ever felt.[5] Morlun then told Spider-Man that he would eventually kill him, and now that they had made physical contact, he could find Spider-Man wherever he went. Though Spider-Man fought back, Morlun continually regained the upper hand. Peter tried to flee, but Morlun was able to find him easily and resume the fight. Spider-Man finally got away after Morlun burned down the building they were fighting in, but Ezekiel told him it was no use. Morlun would find him once again, and kill him.[6]

Morlun continually attacked Spider-Man over the next few days, endangering the lives of innocent citizens if Peter tried to flee. With Ezekiel's help, Peter managed to briefly escape with a sample of Morlun's blood, which he discovered contained the DNA of every genus in the animal kingdom. Realizing that Morlun's DNA was pure, Peter found a weakness he could exploit.[7] Luring Morlun to a nuclear power plant, Spider-Man injected himself with a dose of radiation that would kill a normal human being, but was only enough to weaken him due to the radiation already in his blood. When Morlun arrived, he prepared to feed, only to be burned instead by the radiation in Peter's blood. Peter explained that he wasn't a pure spider totem as Morlun had guessed due to the spider that bit him having been previously subjected to a dose of radiation, and that while Morlun could feed on the spider, he couldn't digest the radiation.[8]

Absorbing the radiation rather than his spider-powers with every punch Peter threw at him, Morlun began to disintegrate, and he pleaded for Spider-Man to spare his life, saying he was merely doing what was necessary for his survival and that it was nothing personal. While Peter debated on whether or not to let a monster like Morlun go, Dex suddenly appeared and shot Morlun, causing him to crumble to dust.[9]

Morlun reappeared months later and plagued Spider-Man with sudden and mysterious appearances, warning him that he was coming to finish him. Spider-Man, for a reason not explainable by science, was dying, and Morlun hung back to watch the causes and effects of his ailment.[10] Finally, Morlun struck, and in a climactic battle, brutally beat Spider-Man. Morlun left when the police arrived, opting for a more appropriate time to absorb Spider-Man's life force, leaving the web-slinger one-eyed and near-death.[11][12][13][14][15]

Returning soon thereafter, Morlun entered Spider-Man's room in the Emergency Ward and prepared to feast, apparently unconcerned about the presence of the Avengers (of the New Avengers line-up) in the hospital to check up on their teammate - Captain America, Iron Man and Luke Cage had come in the front door while Mary Jane and an uncostumed Jessica Drew snuck in around the back.[16] Mary Jane, who arrived at Peter's room just as Morlun was about to feed, tried to stop him, but he casually broke her forearm and threw her off to one side. As it appeared he would kill her, Spider-Man suddenly sprung to life in a ferocious display of mysterious new powers, including stingers sprouting from his arms that he used to pin Morlun down, and fangs that he used to rip Morlun's throat out. Morlun died once again, crumbling to dust, weakly saying that it wasn't supposed to be this way.[17][18][19]

Sometime later, the Crocodile Cult resurrected Morlun so that he could devour the Black Panther totem and in turn weaken the nation of Wakanda.[20] As a start, Morlun fed on the long-term Panther adversary Man-Ape. He was defeated by the new Black Panther, Shuri, who, with the help of a witch-doctor, sent Morlun into limbo,[1] where he was forced to battle the endless hordes of Death.[21][22]

At some point Morlun escaped Limbo and continued with the hunt. However, his deaths made him develop a fear of Earth-616, so he continued on to other universes. He traveled to Earth-311 and killed and drained the life essence of that universe's Spider-Man, Peter Parquagh.[23] With the release of the Spider-Bride Morlun began the Great Hunt. [24] He appeared to The Spider-Man of another universe, though it is unknown if this Spider survived.[25] Morlun also attacked and killed a monstrous Spider-Man who had only been a totem for three days.[26] He later arrived at another Earth, where he slaughtered the Iceman and the Firestar of that world before killing the Spider-Man of that world, leaving a helpless Ms. Lion to whimper by herself, though this was watched by a rookie Captain Britain.[27] Morlun hunted down several incarnations of Miguel O'Hara, killing the Miguel from Earth-6375 as he entered Earth-616. Rather than kill the shocked Miguel from Earth-928, however, Morlun expressed fear at the prospect of returning to a universe where he was killed three times and instead retreated. [28] He later went to Earth-13, with his father and brother Jennix and captured the Scion, who was revealed to be Benjy Parker.[29]

When the Inheritors managed to gather the other two spider-totems needed to perform a ritual, The Other and The Bride, the Spider-Army formed to oppose the Inheritors travelled to their base, Loomworld, to stop them.[30]

In the end, the Spider-Army managed to overpower the Inheritors and stop the ritual which would've ended them all. The Inheritors were left in Earth-3145, a universe with a radioactive Earth, where they would die due to them being extremely vulnerable to radiation, and couldn't escape, because the Master Weaver they had enslaved and used to travel across the Multiverse had been killed. However, Spider-Man gave them the knowledge of a shelter in Sims Tower, where they could survive, but not pose a threat anymore.[31]

The Inheritors eventually escaped their prison after Jennix managed to hack Otto Octavius's databases, using Otto's spare clone bodies as a means of transferring their souls into Earth-616. While his brothers and sisters engaged the rest of the Spider-Army, Morlun was focused on one goal: to eliminate Peter Parker once and for all.[32] Locating Peter quickly, Morlun proceeded to chase him throughout the city and gravely wound him, even breaking the latters wrist and Dimensional Travel Watch. Morlun was prevented from making the kill by the arrival of Miles Morales and several other distractions thrown at him by the Spider-Men, frustrating him immensely.[33] Eventually, Morlun was trapped in a cage and rendered unconscious by multiple sedatives shot at him by both Peter and members of the NYPD.[34] After the defeat of his father, the Spider-Army managed to turn Morlun's siblings in to babies and remove their hunger for Totems. Peter asked Miles to call NYPD to bring Morlun so that he could be turned to a baby too.[35]

Morlun was however captured by an unknown group of scientists who imprisoned and experimented on him. Morlun managed to free himself, killing the scientists, and went to live in the sewers eating spiders. After Sin-Eater injected his followers with the Spider-Virus, Morlun sensed them and went after them.[36][37]

After feasting on the mutated man-spiders, Morlun was attacked by Sin-Eater. While Morlun firstly was easily defeating him and boasting how he would feast on Carter even if he was just a man, Carter managed to disorient Morlun with a grenade and shoot him with his shotgun,[38] allowing Carter to absorb Morlun's powers. After the Sin-Eater commited suicide,[39] Morlun regained his powers and was returned to normal.[40]

Morlun possesses a variety of superhuman attributes as a result of his unique physiology:

Even though it isn't known exactly how much, if any, formal training he's had, Morlun has proven himself to be a formidable hand to hand combatant.

Morlun must regularly feed on the life forces of other living beings to stay alive. However, in order to renew himself and to prolong his extremely long lifespan, he must feed on totemic (purer) sources occasionally. Morlun has also proven highly vulnerable to exposure to high levels of radiation. However, Morlun must always be concentrating on keeping himself invincible. He eventually lets his guard down when he is feeding. This weakness enabled Ezekiel to break his nose and the Other to kill him. When his guard is down, he is as vulnerable as any regular human.

Like this? Let us know!
Retrieved from "https://marvel.fandom.com/wiki/Morlun_(Earth-001)?oldid=6479527"
Community content is available under CC-BY-SA unless otherwise noted.