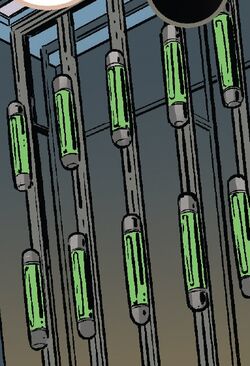 Within the Ultimate Universe, Mothervine was an aggressive biotech enhancement tailored to engineer mutant childbirths. It was fabricated by H.E.L.L. industries. Through a chain of fertility health care clinics using able or expectant mothers to carry unborn children to full term as test subjects for the weaponization of mutation. Highly aggressive programmable Homo superior power activation triggered via voice command, the process created latent mutant sleeper agents able to turn into strategic WMDs upon passphrase initiation.[1]

Once triggered the intended Mothervine active power would not cease until they had fulfilled their programmed target parameter or until the triggered host was terminated. During his days as a government agent, Logan was tasked with a S.H.I.E.L.D. operation to ascertain an exact understanding of Project: Mothervine and root out its functioning before terminating any existing information on the drug itself. Unfortunately he was beaten to the punch by rival agent and former lover, Magda Lensherr, who unbeknownst to him was both carrying the purest strain of the experimental pharmaceutical, as well as pregnant with their unborn son.[2]

This son grew up to carry the very same strain his mother injected herself with, in an absolute concentrated state. Some years later, as Jimmy came of age after his parents' supposed demise, a fellow mutant named Black Box keyed in on a signal emitted by the holographic memento left to Hudson by his late father, carrying the sensitive information about a location where detailed schematics and composition information on the Mothervine project formula was kept for over a decade.[3]

Quicksilver later found out the truth of Mothervine and hatched a plan to revitalize the dwindling mutant population, seeking out his half-brother while also clipping anyone else related to the clean-up of sensitive Mothervine intel before it was all permanently erased. Pietro hoped to use Jimmy's blood as a means to mass produce the Mothervine to restart the mutant race, as well as Box's ability to store and communicate with the leftover Mothervine data stored within his mind.[4]

In the Prime Earth

When Earth-1610 clashed with the Prime Marvel Universe as a consequence of a multiversal phenomenon known as an incursion, Jimmy Hudson and a group of other mutants fell into the latter reality. Amnesiac, these mutants were captured by Miss Sinister. She began running her own experiments with the Mothervine drug still present within Jimmy's blood. Jimmy's natural resistance to telepathy allowed him to break free from Ms. Sinister's control and escape. He was eventually taken in by the time-displaced X-Men under Magneto's tutelage.[5]

After careful study and manipulation of the gene tempering, Sinister found it could also affect natural mutants instead of just unborn fetuses like it was originally intended. Through further experimentation it could also trigger secondary mutations (in some cases with mutants already having secondary mutations) and Tertiary Mutations within other mutants, greatly amplifying their original power set.[6] In other cases, however, the subjects did not take well to the therapeutic enhancement, and the effects ending up killing or degenerating their host.[7] Having managed to work out most, if not all of its defects, she along with Bastion began priming its use on a global scale under Havok and Emma Frost's direction. As part of a test run, Mothervine was used to grant power enhancements to Emma Frost's most loyal subjects during the short-lived existence of the mutant nation of New Tian.[8]

The time-displaced X-Men learned about Mothervine after Jimmy investigated one of Miss Sinister's abandoned bases looking for clues for his past.[9] After noticing that Miss Sinister had started mobilizing, Magneto deduced a connection between Mothervine and the mutants with secondary mutations under Frost's command. Erik's investigation led him to the Hellfire Club, where he confronted Sebastian Shaw.[10] Shaw's secondary mutation proved unstable which greatly impaired him shortly afterwards, and Magneto asked for him to arrange a meeting with the masterminds behind Mothervine in exchange for sparing his life. At the encounter, Magneto attempted to convince Havok to give up on Mothervine, and refused his offer to join his mission,[11] resulting in a battle from which he barely escaped.[12]

The Mothervine plan was put into effect, and bombs containing the catalyst were launched into a dozen major American cities resulting in the emergence or reactivation of primary mutations in people that didn't/no longer possessed the X-Gene, as well as the appearance of secondary and tertiary enhancements in active mutants. Bastion deployed his Mutant Sentinels to contain the new mutants, but a patchwork auxiliary lineup of the young X-Men stopped them.[13] In the meantime, Miss Sinister sent her New Marauders after Magneto, but he escaped. By the time the release of Mothervine reached global levels, Emma Frost learned that all mutants created by Mothervine could have their will controlled. The young X-Men launched a frontal assault on the masterminds' base, but were captured.[14] Emma Frost eventually turned against Miss Sinister, and freed the young X-Men at the cost of the New Marauder's lives, resulting in the death of Miss Sinister at the hands of Jimmy Hudson. Meanwhile, Magneto had enlisted Elixir's help, and patrolled every Mothervine impact zone. He managed to cure most people affected by the Mothervine bombs, except for those that already carried a dormant X-Gene. Emma Frost and the young X-Men confronted Havok and Bastion. Xorn sacrificed himself to kill the latter, while Emma Frost and Polaris worked together to return Alex to his normal self so he could realize the error of his ways. When Elixir was taken to the masterminds' base, he neutralized all samples of the Mothervine serum and even purged it from Jimmy Hudson's system, putting an end to the Mothervine threat once and for all.[15]

Sometime after a global excursion, Mystique went on another of her criminal endeavors. Whilst seeking out a mutant detainee at Trask Enterprise by the name of Whitney James, she used the mission as a means of securing vital coding pertaining to the remnants of the Mothervine formula. She was unsure whether it was the actual data for it or for something else entirely, but opted to be sure by securing it for herself.[16]

The initial purpose of Mothervine was to devise controlled and easily weaponized genetic alteration on command. To that end the drug, once injected into a healthy mother, would instead rewrite the DNA and RNA of an unborn fetus to produce a mutant childbirth instead of a regular human babe.[3]

The mutants born this way lack conscious activation and utilization of their powers on they're own, requiring a remote trigger in order to spontaneously activate or deactivate dormant abilities without the sleeper agents conscious control.[14] It could also be tempered to recreate deceased mutants with all the same powers and personality traits of the copied genetic template. Effectively creating physically and mentally re-programmable clones of those whomever the geneticist desired to resurrect, making for incredibly effective double agents to be deployed in the field.[17] Miss Sinister later discovered other effects that Mothervine had on the Mutant genome.

For not only could it manipulate genetic code while in utero to ensure mutant childbirths. The project could also engineer spontaneous mutation on command in natural Mutants and Non-Mutants alike. Having experimented with its effects on her New Marauders, results showed that while direct application often proved fatally toxic to the user.[6]

Mothervine also triggered Secondary and Tertiary Mutation within the affected host. As well as activate or re-trigger primary mutations in non mutants as well as depowered mutants who lost their powers on M-Day.[18] Even still, this artificial mutation has it's drawbacks, mutants enhanced in such a way were often left with debilitating side effects. Many new mutations caused by the Mothervine drug are wildly unstable, often leading to loss of control of the newfound power within the effected.[11] More often then not, those who took to it end up suffering a rebounding effect of their overcharged abilities, potentially causing fatalistic degeneration within their augmented biophysical structure.[12]

Sinister went one better with her experiments with the Mothervine, finding a way to control both the affected and their power-set via remote control activation even from a world away. Not simply just switching the powers of those exposed to Mothervine on and off, but outright total control of motor skill and mental facilities of whoever comes under its influence.[14]

Retrieved from "https://marvel.fandom.com/wiki/Mothervine?oldid=5797088"
Community content is available under CC-BY-SA unless otherwise noted.