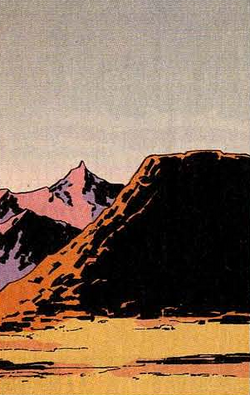 The Mount served as the base of operations for the group known as the Pantheon, but it also housed several hundred civilians as well. Primarily a self-sustaining environment, the Mount was dismantled after an attack by the Endless Knights, a group of undead warriors called into action by the Pantheon's founder, Agamemnon. Fortunately, the Hulk, and other Pantheon core members, successfully evacuated all the civilians out of the structure beforehand.[1]

Years later, after Hydra, led by Captain America after being transformed into a Hydra agent, took over the United States, a resistant movement called the Underground was formed to resist Hydra's rule, and the Underground used the Mount as its hideout.[2] The Mount later became home to civilians who were left homeless following Hydra's destruction of Las Vegas.[3] Eventually, Hydra discovered that the Underground was using the Mount as its hideout and launched an attack,[4] but Hydra couldn't penetrate the Mount's defenses. So, it sent out a resurrected Hulk to smash his way into the Mount so it could continue its attack. The Underground managed to evacuate, but it unexpectedly left behind the Iron Man A.I. where he was personally confronted by Steve Rogers. To stop Rogers, the A.I. detonated his own armor in attempt to kill him. The Mount was destroyed, but Rogers was rescued by Madame Hydra.[5]

Like this? Let us know!
Retrieved from "https://marvel.fandom.com/wiki/Mount?oldid=5809290"
Community content is available under CC-BY-SA unless otherwise noted.