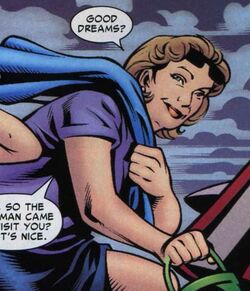 The mother of William Baker, Mrs. Baker was unaware that her son had become a wanted criminal -- William operating under the alias of Flint Marko -- nor of his super-villain career as the Sandman. Spider-Man first learned of her when, reappearing after having been away for several months as a member of the Frightful Four, Sandman broke away from their fight when he learned it was Christmas Eve, and he made it a point to always visit his mother that time of year despite his fugitive status. Sympathizing, Spider-Man even lent Sandman a gift he'd originally meant for Gwen Stacy so he would have a present for his mother.[1]

Alcoholism: Mrs. Baker had a serious drinking problem. She would often take her son to Coney Island and let him build sandcastles all day while she drank to the point she could no longer function and the boy was forced to navigate the pair home.[2]

Like this? Let us know!
Retrieved from "https://marvel.fandom.com/wiki/Mrs._Baker_(Earth-616)?oldid=5874150"
Community content is available under CC-BY-SA unless otherwise noted.