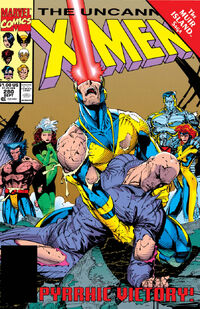 The Shadow King attempts to free himself from the Astral Plane and enter the physical world to take it over. He takes mental control of the inhabitants of the Mutant Research Center on Muir Island and several X-Men who show up to help. Several are freed by Forge, and Professor Xavier calls for help from X-Factor.

X-Factor and the freed X-Men battle the controlled X-Men and Muir Islanders, and the Shadow King is eventually defeated when a Forge frees Psylocke, who plunges her psychic blade into Polaris's head and disrupts the Shadow King's link to the physical world.

The series had several lasting results for the X-Men family of characters:

Retrieved from "https://marvel.fandom.com/wiki/Muir_Island_Saga?oldid=5763159"
Community content is available under CC-BY-SA unless otherwise noted.