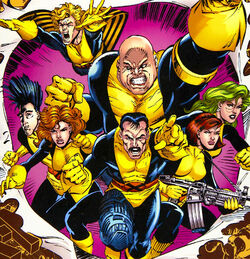 The Muir Island X-Men were a team of mostly X-Men reservists and associates (including several non-mutants) who came together during an emergency situation at a time when most of the world believed the official team of X-Men had died in battle during the Fall of the Mutants. This short-lived team was never officially sanctioned by Charles Xavier or any of the members of the main X-Men team. As their name suggests, they used Moira Kinross' Muir Island research facility as their base of operations.

The team formed during the Reavers' siege of the island. Banshee had recently regained his powers thanks to the Morlock Healer. He rescued Polaris from the Marauders' control, and brought her to Muir with him. Moira then performed tests that determined Polaris' magnetic abilities had waned while at the same time she gained a new power to harness a then-unknown energy source to increase her strength, size, and invulnerability.[1]

Banshee then met up with Amanda Sefton and Alysande Stuart who were in search for the Britain-based team Excalibur. On their way to Muir Island, all three were attacked by the Reavers, who had been dispatched on a mission to murder Moira and Banshee.[2] Amanda used her magical abilities to teleport them away in the nick of time. The Reavers pursued them however and during a skirmish, Sean was mortally wounded but saved once again by the Morlock Healer.[1]

The Muir Island residents regrouped to fight back against their attackers. Moira had Polaris, Amanda, Tom Corsi, Sharon Friedlander, and Alysande suited up in new X-Uniforms and sent them out to defend the island. But Legion (who was called Danny rather than David at the time) betrayed the Muir Island X-Men by secretly aiding the Reavers. Legion's meddling helped lead to the capture of all of the Muir Island X-Men as well as the death of Sunder in an extended conflict. Eventually, Banshee joined in the fight but was taken down as well.

After the conflict with the Reavers, Forge chose to remain in Scotland and became a member of the Muir Island team while Freedom Force returned to America.[3] He aided Banshee in constructing a new defense system for the island. Meanwhile, Polaris' new powers manifested a side effect of causing everyone on the island to exhibit a darker personality. Moira was particularly affected by this.[4] At the same time, Legion’s Jack Wayne personality had secretly taken control of Danny and subdued the rest of his multiple personalities. Jack/Legion locked up Polaris in a top security cell and left her there to rot while he amused himself by toying with the rest of the Muir Island residents.[5]

Search for the X-Men

Moira hooked Danny up to the recently recovered Cerebro in the hope that he could use his telepathy to find the X-Men. Once Legion began using Cerebro, however, Amahl Farouk a.k.a. the Shadow King emerged and took control of him.[6]

Based on Danny’s (actually the Shadow King’s) statements, Banshee and Forge believed that Storm at least could be found in Cairo, Egypt. They left to search for her without telling Moira where they were going since Banshee no longer trusted Moira’s darker personality. They set out for Egypt unaware that Storm was actually in Cairo, Illinois.[7]

While Cylla Markham was flying Banshee and Forge to Egypt, she happened to show them a magazine with Dazzler on the cover. The men decided to go to California instead of Cairo as they believed Dazzler was a more concrete lead. They parted ways with Cylla, whose plane was then blown up by the Fenris twins in an attempt to murder Banshee (whom they mistakenly believed was still on the plane).[7]

While on their way to California, Banshee and Forge made a stopover at Xavier's mansion. Finding the school in ruins, they set up shop and rebuilt it. Everyone believed they had died in the plane explosion and Banshee wanted to keep it that way for a while since he no longer trusted Moira.[8] The two men planned to infiltrate Muir Island through a backdoor in the island's defense system that only they knew about with the intention of figuring out what was really going on with Moira. Before they returned, Banshee decided they first had to warn the other X-Men of the potential threat to their lives.

Jean Grey, then a member of X-Factor, paid a visit the newly-rebuilt X-Mansion and teamed up Banshee and Forge to fight mysterious evil doppelgangers of the X-Men.[9] All three then went on a mission to save Colossus and Callisto from rogue Morlocks.[10]

Following that rescue mission, Banshee, Forge, Colossus, and Callisto all went with Jean to X-Factor's spaceship which they discovered was under attack by the Genoshan Magistrates and Press Gang. The combined mutant forces (aided by Officer Charlotte Jones) were able to defeat the attackers. Afterwards, Banshee and Forge remained with X-Factor while the amnesiac Colossus and Callisto opted to leave.[11]

By then, Prof. X had returned from an extended sojourn in the Shi’ar Galaxy and led all the members of the X-Men and X-Factor at that time on an assault against the Shadow King. A long campaign took place in which the Shadow King was finally defeated and his mentally enslaved captives were freed from his control.[14] In the aftermath, there was a major reshuffling of team memberships. The original X-Factor team rejoined the X-Men as did Forge and Banshee in support roles. Several of the Muir Island mutants - Polaris, Guido, and Jamie Madrox - left to fill the vacancies in the X-Factor roster. With a majority of its members now departed and the conflict that necessitated the team coming together having been resolved, that was effectively the end of the Muir Island X-Men.

Retrieved from "https://marvel.fandom.com/wiki/Muir_Island_X-Men_(Earth-616)?oldid=5839371"
Community content is available under CC-BY-SA unless otherwise noted.