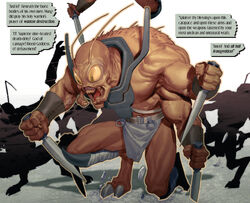 Mung the Inconceivable was an insectoid alien from the same race as Miek who deserted Hulk's Warbound to rampage across the Earth. Plying his trade as a gladiator in the imperial arena of Sakaar, Mung presumably fought for the Hulk during the uprising against the Red King, as the alien warlord was counted among the Hulk's warbound during the invasion of Earth. However, as he himself expressed in his war-journal, Mung had no interest in the Green Scar's revenge on the 'Pinkies' and his insectoid army broke away from the Hulk's warbound to go looting in Manhattan.[2][1]

Like this? Let us know!
Retrieved from "https://marvel.fandom.com/wiki/Mung_(Earth-616)?oldid=5690145"
Community content is available under CC-BY-SA unless otherwise noted.