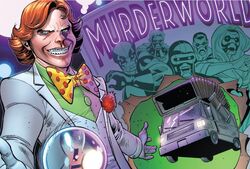 Ladeez, gentlemen, an' children of all ages -- Arcade welcomes you to -- MURDER WORLD, where nobody ever survives!!

Rather than being a single location, Murderworld is the name given to the fairground/amusement park style deathtrap used by the assassin-for-hire Arcade. Utilizing sophisticated robotic and holographic systems, Arcade has frequently pitted various superheroes against Murderworld, sometimes for money and sometimes merely for the challenge. Arcade has built Murderworlds under Manhattan,[6] on an island in the Caribbean Sea,[7] in Antarctica,[8] in England,[9] on Coney Island,[1] and numerous other locations around the world.

Before becoming a supervillain, Arcade began developing deadly proto-Murderwold-style games in the arcade on Coney Island. These devices lay unused for years until Arcade revisited them and encountered She-Hulk, Hellcat, Telekinian, and Tom Hale.[1]

The first known Murderworld was built underground beneath an amusement park in Manhattan. A large portion of this Murderworld was a large scale pinball machine, but it also contained trapdoors, mazes, booby traps, and a variety of killer robotics.[6][10][11]

When the Maggia hired Arcade as an assassin, Spider-Man, Captain Britain, Courtney Ross became the first visitors to Murderworld. Although the pair escaped and destroy a large portion of Murderworld, Arcade vowed to rebuilt it bigger and better than before.[6]

Hired by Black Tom and Juggernaut, Arcade was able to capture Spider-Man and X-Men off the streets of New York City to have them battle inside Murderworld. With some effort the X-Men and Spider-Man were able to escape and rescue Colleen Wing, Betsy Wilford, and Amanda Sefton.[10]

Working with Doctor Doom, Arcade built an amusement park over Murderworld filled with even more perils. However, the X-Men were again able to escape.[12] Mystique later made a deal with Aracde to use Murderworld as training ground for the Brotherhood.[13] Shadowcat and Colossus found themselves trapped in Murderworld once when Arcade recruited them to save his life from Doctor Doom. However, Doom was revealed to a robot controlled by Miss Locke, who was allowed to try and kill Arcade on his birthday.[14] Nightcrawler had to infiltrate Murderworld once when Arcade abducted and trapped Amanda Sefton there.[11] The original X-Factor had to brave the hazards Murderworld once to save the mutant son of Arcade's therapist.[15]

After leaving Camp Verde, Cable and Domino decided to use Arcade's abandoned Murderworld as the new base of operations for X-Force. Murderworld provided a secure base and training area underground, but still offered access to Manhattan making an ideal headquarters.[16] Not long after X-Force took up residency in Murderworld, Arcade remotely detonated explosives hidden within it, destroying most of the structure.[17]

Years later, Kitty Pryde and the Vision were trapped in the remains of this original Murderworld. They were brought there by the Murderworld mainframe, which had gained sentience and wanted to commit suicide.[4]

When working with the Crazy Gang, Arcade kidnapped Courtney Ross because she escaped from his previous Murderworld. Arcade created a theatre and Wonderland inspired Murderworld called The Doorway to Destiny. However, Courtney Ross was rescued by Excalibur.[9] Captain Britain and Shadowcat continued to have multiple run-ins with Arcade and his Murderworld.[19][20]

To kill Rictor and destroy X-Factor, the former Purifier Mr. Taylor hired Arcade to build a Murderworld in inside the closed Power Plant bar in the heart of Mutant Town. Although the members of X-Factor escaped, this Murderworld led to the complete destruction of Mutant Town.[21]

Using robot disguised as Kraven the Hunter, Arcade and White Rabbit captured Wolverine and Black Cat and released them on Murder Island where they were hunted by several millionaires who paid for the opportunity to hunt the world's most dangerous game. After destroying the Kraven robot and facing many of the island's perils, Wolverine and Black Cat escape and capture Arcade and White Rabbit, and, as revenge, they leave the pair stranded in the Savage Land.[7]

When Arcade's assassination business began to suffer because of Deadpool stealing his costumers, Arcade teamed-up with Nightmare to get revenge. Nightmare agreed to help Arcade create a virtual reality/dream realm Murderworld as long as Hercules would also be a prisoner. Together the created a labyrinth, but Deadpool was able to awake from the dream state by plunging a knife into his head severing the two hemispheres of his brain.[22]

To demonstrate his Murderworld arsenal to potential clients and to restore his reputation, Arcade captured the students from the Avengers Academy and the Young Allies from New York City and pitted them against his Murderworld. Fortunately, by working together, the young heroes were able to escape.[23]

Following the events of Necrosha, Arcade was hired by Mortis to capture her sister, Dazzler. To capture her, Arcade designed a concert hall and attacked her with robots versions of powerful supervillains. Although Arcade escaped, Mortis was captured.[24]

Arcade once opened a toy store in New York City with Impossible Man where he sold lethal toys to unsuspecting customers. The Human-Torch, Franklin Richards, and Leech battled Arcade's toys and closed his store.[25]

After realizing he was a joke among the super villain community and hitting rock bottom, Arcade decided to build massive island arena underground in Antarctica with the assistance of Miss Coriander. With the designs of the arena completed, Arcade exercised total control over the of the environment and terrain of his new Arena Murderworld.[8]

As the next part of his plan, he kidnapped sixteen superpowered teens and forced them into a 30-day game of kill or be killed.[5] Unbeknownst the participants, their every move was being filmed. Several individuals died including Mettle,[5] Red Raven,[26] Juston Seyfert,[27] Kid Briton,[28] Nara,[29] Reptil,[30][31] and Apex[30] while the survivors were left physically, emotionally, and psychologically scared. The survivors vowed to never share the secrets of their experience in Murderworld with anyone. However, Arcade released his footage of Murderworld onto the internet making the survivors reluctant celebrities.[30][31]

After releasing the videos of his Arena Murderworld, Arcade went into hiding in Bagalia. To pass time and raise funds, Arcade opened the Massacrer Casino where wealthy individuals can engage in a game of kill or be killed. This lasted until some of the survivors of Arena Murderworld tracked him down, and Hazmat killed him.[3]

Shortly after the death of Gwen Stacy, Arcade constructed a Murderworld underneath Empire State University in order to torment Spider-Man. Unfortunately, he never activated the trap and this Murderworld was left alone so long it started to crumble. Years later, Spider-Man's ally Ghost-Spider triggered the trap and fell into Murderworld. After surviving Arcade's androids, a prerecorded message from Arcade revealed that she could've left at any time, prompting her to leave.[2]

In the Ultimate Universe, Murderworld is a first-person shooter video game designed by Arcade and the source of his fortune. Since becoming a millionaire, Arcade used his fame and fortune to travel the world in search of more immersive gaming experiences. He was eventually hired by Mojo Adams to study and hunt town the X-Men on a private island.[32]

When the heroes used Doctor Strange's Orb of Teleportation to travel Castle Doom, they were divert by Baron Mordo to Murderworld where the heroes had to defeat Arcade to escape.[33]

Webber Torque (or "Arcade", as he calls himself), a student from Bayville High School, once managed to infiltrate the Xavier Institute's Cerebro and Danger Room. Mistakenly believing it was a video game simulation, he altered it into his own Murderworld.[34]

Alcatraz Island was a prison for dangerous mutants. Governor Harcourt Teesdale served as the director-governor. Known to his inmates as "Arcade", he created mutant-themed attractions to torture and punish prisoners, which earned Alcatraz the nickname "Murderworld". A mutant named the Basilisk was used as an unwilling executioner for years until we was able to escape, murder Arcade, and free the remaining mutants imprisoned there.[35]

When Deadpool started a superhuman killing spree, he captured and forced Arcade to build him a new Murderworld with deadlier traps than ever in order to kill the X-Men.[36]

Murderworld is the setting for X-Men: Madness in Murderworld, a single-player side-scrolling arcade game developed by Paragon Software in 1989.[37]

Like this? Let us know!
Retrieved from "https://marvel.fandom.com/wiki/Murderworld?oldid=6578827"
Community content is available under CC-BY-SA unless otherwise noted.