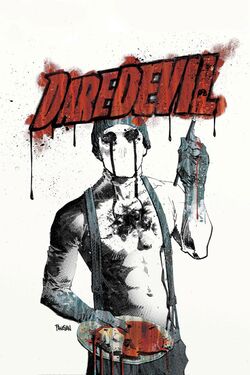 There's this mystique about art. A shared fiction, if you will. An artist presents a piece to the world in its finished form, and pretends that it simply appeared that way, effortlessly birthed from his genius. Both artist and audience prefer to believe that's the truth. It's nice to think that the really good creators have some direct connection to the divine. But it's a lie. In reality, it's hours and hours of missteps, frustration, and bad ideas that get sliced away to reveal some kind of truth. It's never easy. In fact... It's agony.

Muse was a mysterious, deranged artist whose gruesome work of art was discovered after he anonymously sent the vigilante Blindspot the address of the warehouse in Washington Heights where he had planted it. This work consisted of a mural painted with blood from over a hundred different missing people.[1]

Some weeks later, he defaced the mural, and replaced most of it with the phrase, "You're only as good as your last performance" followed by a new address that directed the police to a vacant building. Inside one of the floors, Muse had planted the corpses of six Inhumans he had previously abducted, posing them with props as if they were performing mundane tasks.

A.D.A. Matt Murdock, who was one of the people that discovered Muse's second artwork, sensed Muse's presence in the distance, witnessing as people unveiled his new work for the first time, and left the scene to change to his Daredevil suit and confront the villain.[1] However, Muse drove him off using a dummy grenade, and made his escape.

During his first public appearance, Muse attacked a courtroom and kidnapped Judge Laird, who had been presented by Councilwoman Andrea Pearson with the case to shut down public access to the location of his blood mural.[2] Muse took the judge to the sewers, where he had also abducted Pearson and two police officers, and planned to use all of them for a new work. Blindspot, who had witnessed the judge's kidnapping, followed Muse and caught his attention. Muse chased Blindspot deeper into the sewers, but the vigilante used his suit's camouflaging to disconcert Muse and return to the victims to tie them off and escort them to safety. Blidspot tried to lead Muse away again, but his suit ran out of batteries, and Muse captured him.[3]

Muse took Blindspot to his garret and while he was deciding what to do with him, Daredevil arrived, having tracked them down with his senses. Muse gouged Blindspot's eyes out and then escaped. On his way out, he passed by a room where all of the missing people used in his mural were hanging from the ceiling being drained of their blood, and still alive. He cut the ropes hanging them to distract Daredevil and save time, but he was stopped on the rooftop by Inhuman authorities, who had been assisting Daredevil in investigating Muse due to the crimes on Inhumans.

Daredevil caught up with him once Muse had been cuffed, fueled by rage for Blindspot's injury. Having noticed Daredevil's intentions, Muse broke his own fingers, stating that's what Daredevil would've wanted, for him to be unable to create more works of "art." After Daredevil took off Muse's mask, the villain was taken away.[4] Muse was subsequently imprisoned at the high-security detention level of New Attilan. His hands healed eventually.

Following the election of Wilson Fisk as Mayor of New York City and his implementation of strict anti-vigilante policies,[5] Muse became inspired by Daredevil's continued fight for justice in spite of the persecution,[6] and decided to scape,[5] killing twelve guards in the process.[7] He went on to vandalize numerous landmarks of Manhattan with giant-sized irremovable graffitis that featured different vigilantes showing support for them. A group of police officers intercepted Muse when he was finishing a mural of the Punisher. Muse slaughtered them and adorned the graffiti with their bodies.[8] Mayor Fisk used the tragedy to push his anti-vigilantism agenda, by blaming the Punisher for it.

Having regained his sight due to the intervention of The Hand, Blindspot decided to confront Muse on his own. He defaced one of Muse's murals to lure the murderous artist, and they fought.[9] When Muse overpowered Blindspot, he was briefly taken over by the power of The Hand's Beast, and defeated Muse. However, he refused to kill him. In response, Muse walked into a burning pile of debris complaining that it was supposed to be his own story and not Blindspot's. He succumbed to the fire, using his final words to lament because he had "so much beauty left."[6]

Imperceptibility: Muse's body acts like a vortex which can pull in every bit of sensory information around him, making even Daredevil's enhanced senses hard to target him.[2]

Superhuman Speed: Muse appears to move faster than the human eye can see.[7]

Expert Combatant: Muse appears to be an extremely agile and efficient combatant, being able to defeat a gang of six armed people lightning fast.[1]

Like this? Let us know!
Retrieved from "https://marvel.fandom.com/wiki/Muse_(Earth-616)?oldid=5412982"
Community content is available under CC-BY-SA unless otherwise noted.