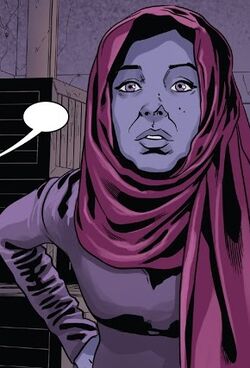 I live here. My actual home is just rubble. When I was little, I had such dreams of life. Such dreams. Do you think that any of them included this? Do you?

Following the deaths of her husband and eldest son, Mussaret took over their group of rebels. After learning that Alchemax was going to sell a fleet of Spider-Slayers to Trans-Sabal's ruler, she had one of the sellers kidnapped. She initially tried to force him to cancel the sale, but she then tried to convince him to use the spider-slayers to over throw Dahn instead. When the Scorpion and Spider-Man attempted to rescue Stone, they began to fight each other. Their battle caused the building they were in to collapse and Mussaret gave her life to save Ty. Inspired by her sacrifice, he used the slayers to force Dahn out of the country.[1]

Like this? Let us know!
Retrieved from "https://marvel.fandom.com/wiki/Mussaret_(Earth-616)?oldid=5767684"
Community content is available under CC-BY-SA unless otherwise noted.