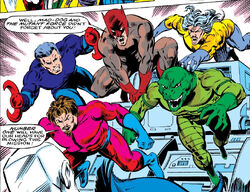 Burner, Lifter, Slither, Peeper, and Shocker were originally part of a new Brotherhood of Evil Mutants led by Magneto (Magnus).[1]

He quickly abandoned them, but the team reorganized into Mutant Force under the Mandrill.[2] Still later, they were employed by the Secret Empire under the leadership of Mad-Dog.[3]

The original five seemed to return to being Mutant Force but were easily apprehended by the New Warriors.[5] Shocker was later seen in Genosha. It was presumed that most of the Mutant Force were depowered in the event known as the Decimation. Peeper came through it with his powers intact but was killed soon afterward. The rest of the team later resurfaced, their powers also intact, and fought Alpha Flight.[6]

Like this? Let us know!
Retrieved from "https://marvel.fandom.com/wiki/Mutant_Force_(Earth-616)?oldid=5548899"
Community content is available under CC-BY-SA unless otherwise noted.