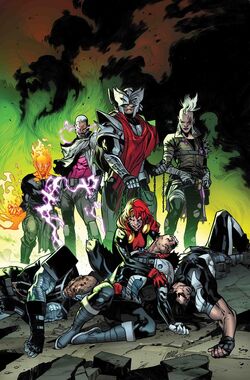 The Mutant Liberation Army was Stryfe's personal attack force among his group of New Canaanites. The MLA was behind the military build-up of the country of Transia in order to draw the attention of Stryfe's enemy Cable.[1] The MLA had used the Clan Chosen as bait in order to bring Cable back to their time while they fought against the reassembled members of X-Force.

They later waited to ambush the Clan Askani as they embarked on their trip to Ebonshire due to a false telepathic call from a mind-controlled Rachel Summers who Stryfe used to masquerade as Mother Askani.[2]

Retrieved from "https://marvel.fandom.com/wiki/Mutant_Liberation_Army_(Earth-4935)?oldid=5617843"
Community content is available under CC-BY-SA unless otherwise noted.