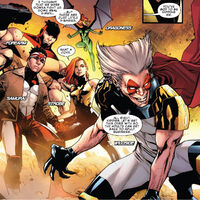 The team seemed mainly organized of disillusioned, anarchic mutant youths. Stryfe founded the group sometime after coming to the 20th century (from roughly 2,000 years in the future). They were likely assembled as a tool while Stryfe assembled his master plan[1]. The exact size of the organization is unknown, but they were seen to have had several advanced bases around the world, and employed a number of presumably human guards.

When the team first appeared, their mission was to rescue Rusty and Skids, two New Mutants who had been captured by the government. Rusty and Skids would not be seen for some time later, but when they were it was revealed that they stayed with the group due to mind control devices Stryfe implanted in them. It was never indicated that any of the others members had similar implants.

After the organization was dismantled, four of the imprisoned members (Wildside, Reaper, Forearm and Tempo) were liberated and recruited by a mysterious villain named Reignfire, who was believed to be a futuristic version of Sunspot. Already among the ranks of the new MLF were former New Mutant member Moonstar (undercover on behalf of S.H.I.E.L.D.) and Locus. X-Force's Feral also defected to the MLF, and Tempo betrayed them and went her own way. After a few minor missions, including a group that infiltrated Muir Island to obtain information on the Legacy Virus, the group was captured by members of Operation: Zero Tolerance.[citation needed]

The MLF relocated to Krakoa to be a part of the mutant nation.[2]

Retrieved from "https://marvel.fandom.com/wiki/Mutant_Liberation_Front_(Earth-616)?oldid=5765328"
Community content is available under CC-BY-SA unless otherwise noted.