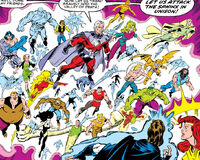 The Mutant Liberation Front is a group of superbeings, most of them mutants (although there are others of another nature, such as androids or endowed with cosmic powers), who oppose the reign of the Sphinx since they considered that his race was discriminated against. The Front was liberated by Magneto, who had several lieutenants, as was the case with Wolverine. Soon the mutant cause gained followers, especially among the members of the Caucasian race who also believed themselves to be discriminated against. The activities of the Mutant Liberation Front are not known but they earned the hatred of Sphinx that put their SHIELD agents and their main group of super men, the Avengers, in their wake. One of the Front's human sympathizers was Nick Fury, who died in combat, another was Reed Richards, a Taylor Foundation worker who had access to data vital to security, such as the location of the force field generator that protected the Island of Maqman where the base of the Sphinx was located.

Magneto sent three of his most important operatives, Marvel Man, Cannonball and Firestar to get the information provided by Reed Richards, as well as Wolverine as possible support. However, the three mutants found themselves face to face with the Avengers who threatened to impose their number, then Wolverine made an appearance that won enough time for his companions to escape, although this cost him his life.

With the data obtained by Richards, a group of mutants entered the Maqman Island to destroy the force field generator to be able to throw all their forces against Sphinx. The mutants met the Avengers on their way and in the middle of the battle, one of the Avengers, Nova, turned against his companions and supported the mutants by giving them enough time to destroy the field. Thus, the Mutant Liberation Front launched all its forces against the Sphinx in a global attack that included attacks on the Sphinx itself and its empire. Sphinx used its enormous power to decimate the mutants who faced their sure extinction but had to withdraw to face some mutants that had sneaked into its base and after hard fight, forced to return this world to normal.[citation needed]

Retrieved from "https://marvel.fandom.com/wiki/Mutant_Liberation_Front_(Earth-9105)?oldid=5548905"
Community content is available under CC-BY-SA unless otherwise noted.