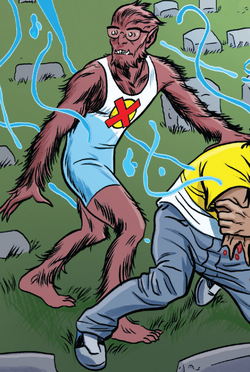 Myles Alfred was the son of Edward Alfred who was renowned in academic circles, but was neglectful and seldom present as a father. His mother was an ethnomusicologist by profession, and somewhat subservient at home. She was also described as an 'exponent of the North African 'ud'.[1]

Myles Alfred was an expert in literature and was known outside of his mutant fandom for his literary work. It was while studying at Harvard University that he authored a critically acclaimed piece on Walt Whitman. Myles' mutant powers were triggered when a group of college buddies harassed him. He left them with multiple slashes. At first, extreme emotions triggered his animal form but he learned to control it at will. [1]

When most of the original mutant team died during a hostage situation in a New York City music studio, Alfred joined the newly line-up of the media-drive mutant team X-Force. In their first outing and press conference, they were confronted by the old X-Force who wanted them to drop the name, as they were only using it for their own profit. A fight broke out, and Myles suffered broken glasses and an injured arm.[1]

Deciding to improve his confidence, he frequently teamed with Phat in order to increase his confidence. When Edie Sawyer was killed on the same mission he quit the team and went home, however he returned to the team.

Vivisector stayed with X-Statix and was with the when they battled Bad Guy, visited the movie set of the X-Statix movie and accompanied the male members of the team for a press conference.[2]

Myles suffered through the death of Phat, who sacrificed his life to save the rest of the team. He then went on to help Henrietta Hunter avenge her death. Her first death, that is, though she utilized the supernatural circumstances of her second death to do so. This involved the outright murder of a European head of state. This was enough to put Hunter at rest.[3]

He briefly lost his powers and left X-Statix after taking a serum to help him to return to a normal life. Dr. Alex Finlay, the doctor who "helped" Myles, used his method of stripping powers from mutants to give himself Myles' abilities. The procedure drove Dr. Finlay insane and implanted Myles' feelings of resentment toward his father into his mind. Myles was able to kill the deranged "Vivisector II" by using his father's birthday present from him--a solid gold ballpoint pen--to stab it in the eye. After that incident, Myles regained his powers and was able to rejoin X-Statix.[4]

Myles helps the team when Doop's brain becomes lost, parts of it in various spots on Earth. The team confronts the Avengers over Doop, as the Avengers know he is very dangerous. Myles loses his piece of the brain to Hawkeye, who lies to fool Myles into believing a partnership with the Avengers was possible. However, the team's willingness to do what they perceived was right convinces Captain America to hand over custody of Doop.[5]

After this mission, the team decided to retire. They held a going-away party, attended by multiple heroes, including the Avengers. While at the party, they were convinced to take one last final mission, clearing a billionaire's house of armed gunmen. Various circumstances led some of the team to believe this final mission was a set-up designed to kill X-Statix. The overwhelming odds killed the team one by one though they killed a large portion of their attackers. The gunmen wore the same uniforms as the hostage takers at the music studio so long ago. Myles was shot.[6]

Myles survived being shot and the mission that killed almost all the rest of his teammates. He retired to focus on his writing only for, years later, Dead Girl and Doop to convince him to join the newly reformed X-Statix in order to confront Zeitgeist and his new team, The X-Cellent.[7]

Vivisector doesn't know how to swim. It is unknown if it depends on his mutant form, or on his capacities.[8]

Like this? Let us know!
Retrieved from "https://marvel.fandom.com/wiki/Myles_Alfred_(Earth-616)?oldid=6038135"
Community content is available under CC-BY-SA unless otherwise noted.