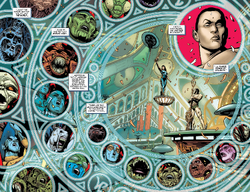 The Myriad was a secret organization consisting of representatives from various alien races, both humanoids such as Badoon, Spartoi, Kree, and Skrulls, as well as non-humanoids such as Dire Wraiths. They were deserters and runaways -- with an agenda of greed, gain, and global domination -- who established their own criminal cartel. The Squadron Supreme shut down a Myriad arms trafficking operation dealing with nuclear isotopes, and investigated a Myriad undersea base, at the same time that the Inhumans were doing the same.[1]

Warrior Woman, who had betrayed Squadron Supreme by making a pact with Modred the Mystic, used his magic to take over the Myriad organization, turning it from a crime syndicate of several thousand disenfranchised aliens focused on profit, into an army bent on conquering the Earth. With the might of their warriors, within one day they conquered the savage and barbaric North African nation of Alambra, and by utilizing alien technology, turned it into a nation a century ahead of its time overnight.[2]

Retrieved from "https://marvel.fandom.com/wiki/Myriad_(Earth-616)?oldid=5548932"
Community content is available under CC-BY-SA unless otherwise noted.