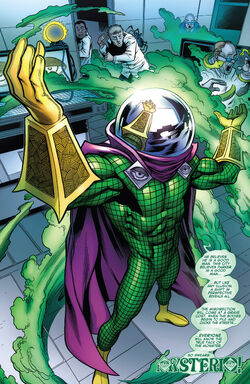 He's got illusions, the gas, but the helmet gives his speech pattern some crazy mind-bending properties.

After realizing Spider-Man's Black Suit wasn't ordinary cloth, he blackmailed Black Cat into stealing a portion of the suit. The klyntar broke out of its confinements; however, and bonded to Quentin. The suit gave him enhanced agility, durability, reflexes, speed, and speed. It could grow its own helmet and claws.[1] During a battle with Spider-Man, Quentin used his suit's built in flamethrower, causing the Black Suit to flee and return to Peter.[2]

Retrieved from "https://marvel.fandom.com/wiki/Mysterio_Suit?oldid=6102562"
Community content is available under CC-BY-SA unless otherwise noted.