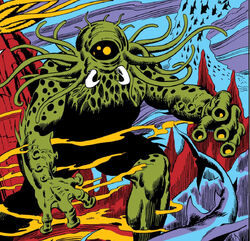 N'Gabthoth was either a Great or a Lesser Old One,[1] one of the Primal Gods,[3] and a servant of Shuma-Gorath.[5]

For uncounted eons, he slept in a cave down a cliff of Starkesboro, Maine, New England, known as N'Gabthoth's Roost, held sacred by the people of that town and considered belonging to N'Gabthoth.[3]

At the time Doctor Strange came to the town, he eventually managed to cause the death of Sligguth, waking up N'Gabthoth. At the same moment, Ebora had the people of Starkesboro to capture Clea, Wong and Johnny Frames, to offer them to N'Gabthoth.

Strange's attempt at stopping him was quickly dismissed, until the astral form of the Ancient One entered Strange's body to give the strength to battle the monsters. Overwhelmed, N'Gabthoth fled to the dark church of Stakesboro to recover a chest with a map leading to Stonehenge, England. Strange track him down, defeated[3] and killed him.[6]

N'Gabthoth has magical powers, which manifest as energy bolts being fired from his eyes.

N'Gabthoth is an amphibious creature.[3]

Like this? Let us know!
Retrieved from "https://marvel.fandom.com/wiki/N%27Gabthoth_(Earth-616)?oldid=6431721"
Community content is available under CC-BY-SA unless otherwise noted.