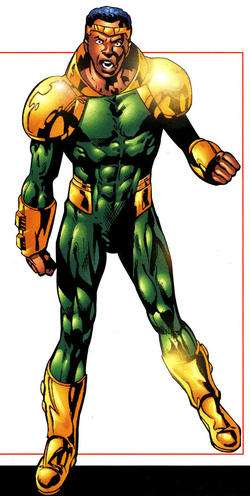 N'Kano was exposed to energized Vibranium from the Vibrasurge Project by accident. Wakanda sent N'Kano to America to train with the Fantastic Four, however, soon after he arrived, they disbanded due to the death of Mr. Fantastic.[2]

Huntara and Psi-Lord decided to form a team of their own called the Fantastic Force. He joined along with with Devlor, an Inhuman with the ability to become a giant ape-like creature. One of their first battles was against Klaw.[3]

They next battled Zarathustra who was raised from childhood to be an assassin for Lord Moses. Paul Alvarez believed that Huntara was his long lost sister Mary Elizabeth Alvarez who he saw walk into a portal with a mysterious man back when they were children. Huntara was raised by Warlord Kargul in another timeline so the theory seemed somewhat plausible. But it was strongly hinted that Paul Alvarez was wrong and that Zarathustra was really Mary Elizabeth Alvarez.[4]

The Inhuman Seeker tried to apprehend Devlor but determined that he was "the one" and chose to file a report saying Devlor was dead. Devlor mentioned that the Seeker must know what it was like being a freak.[5]

They next battled A.I.M. and the Super-Adaptoid.[6] After that came the battle with Dreadface.[7] They went up against Grey Gargoyle.[8]

Being very angry with her father, Huntara attacks Nathaniel Richards. However, Franklin Richards soon reminds her that he is the leader of the Fantastic Force and Franklin thereby orders her to stop her attack so they can hear what his grandfather has to say. Nathaniel explains that Franklin's mother and teammates are about to stand up to a Rogue Watcher and an even greater menace. Kristoff Vernard then advises that Susan Storm Richards faces inter-spacial danger and that he and the Fantastic Four have been unable to find a means to rescue her. Huntara immediately leaves the group and transports to the Negative Zone. There she saves Susan Storm from certain death in the Negative Zone's Explosive Area.[9]

They then battled the Inhuman Genetic Council.[10] Black Panther and Human Torch join the team to battle Lord Moses.[11]

They battled Vangaard (Johnny Storm) from an alternate future of Earth-721. They were assisted in battle by the Human Torch and Black Panther.[13] Johnny though his heroic actions caused Vangaard to see his old life as a hero and decided to end his assault.[14]

Huntara would later leave the team but be replaced by She-Hulk who helped battle the Puppet Master.[15] On a trip to Wakanda they battled the Sons of Sinanju[16] and the Mound monster.[17]

Diablo also attempted to manipulate Psi-Lord into helping him defeat Mephisto but this only ended with his defeat.[18] The team would meet its end with the return of Reed and the de-aging of Franklin back to a minor all caused by his future son Hyperstorm.[19] It was revealed that much of what Nathaniel had taught Franklin was in an attempt to alter the timeline so that Hyperstorm would not exist.[20]

After the Fantastic Force team disbanded, N'Kano wandered America for a short while before he attempted to return to Wakanda to seek help from Black Panther (T'Challa) in regaining control of his powers,[21] only to be stopped by White Wolf who shot him down with the help of the Hatut Zeraze before he could get to T'Challa, they purposefully caused him to lose control of his powers, which led to the resurrection of Klaw when N'Kano's powers caused Klaw to coalesce[22] and also rendered N'Kano temporarily unable to speak or use his powers.[23]

His speech returned quickly although his powers did not at first, shortly after his attack by White Wolf he met Queen Divine Justice[1] who he believed to be a cook, the two shared a kiss while they were trapped during a missile strike,[24] and shortly after N'Kano learned that Queen was Dora Milaje, making anything between them forbidden at the time.[25]

Shortly following this discovery, N'Kano learned he could again use his powers and planned to rescue Queen from Man-Ape who defeated him with ease,[26] leading to him needing to be rescued himself by Black Panther.[27] Some time after recovering from the wounds he sustained after the battle with Man-Ape N'Kano met with Queen who confessed her love to him, he was reluctant to listen given the forbidden nature of their relationship but she still managed to convince him to aid her in freeing the Jibari peoples being held as prisoners including Man-Ape,[28] which led to a fight with Black Panther (T'Challa) who was hallucinating from a brain aneurysm at the time and believed himself at times to be fighting Magneto.[29]

While hunting for a kidnapped girl, his king called M'Kano and Asha to aid him in his search.[30]

Vibration Emission: N'Kano is infused with Vibranium. He can create and control vibrations which can manifest in different ways including destructive shockwaves, subtle frequency matching, and phasing himself and others through solid substances.

Has been shown to be extremely arrogant especially in regards to how powerful he is.

Vibraxas must wear a harness to help control his powers and regulate the energy he releases so his bones won't shatter.

Like this? Let us know!
Retrieved from "https://marvel.fandom.com/wiki/N%27Kano_(Earth-616)?oldid=6424837"
Community content is available under CC-BY-SA unless otherwise noted.