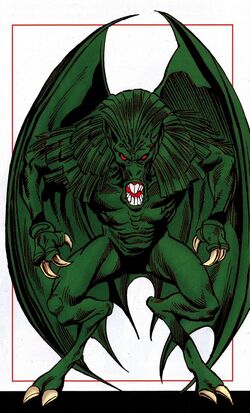 N'astirh was a demon who helped Madelyne Pryor get her baby back from Mr. Sinister, and then fought the X-Men.[2]

During Inferno, he decided to send a demon to possess the body of Hobgoblin, thus creating Demogoblin.[3]

He was supposedly killed by a lightning bolt from Storm.[4]

However a demon called N'astirh later appeared in New X-Men alongside Magik and it is assumed that it is the same demon.[5]

During the Second Coming event, N'astirh and S'ym cut a deal with Bastion's forces and provided them with a "weaponized ritual" that sent Magik back to Limbo. When the X-Men sent a team to rescue her, S'ym and N'astirh approached Pixie to make another deal: if Pixie would kill Magik, and take her Soulsword to N'astirh, he would return the missing piece of Pixie's soul and free her from Limbo's darkness forever.[6]

N'stirh can fly using his wings, for an undefined period of time. His body is highly resilient to superhuman attacks. He can inflict serious injuries with his claws.[citation needed]

Techno-organic Nature: The Transmode Virus grants N'astirh the ability to alter his own shape; infect others with the virus, converting them into "techno-organic" beings; absorb the life energy from converted beings, after which they crumble into inert dust.[citation needed]

N'astirh is a sorcerer, self-taught in the arts of black magic. His sorcery is said to nearly be as powerful as Belasco and have the potential to rival Illyana Rasputin (Magik) in Limbo.[citation needed]

Computer created by Wiz Kid that allowed him to "spell check" his spells, Belasco's Ancient Book of Spells, and power-sensing goggles.

Like this? Let us know!
Retrieved from "https://marvel.fandom.com/wiki/N%27astirh_(Earth-616)?oldid=6223901"
Community content is available under CC-BY-SA unless otherwise noted.