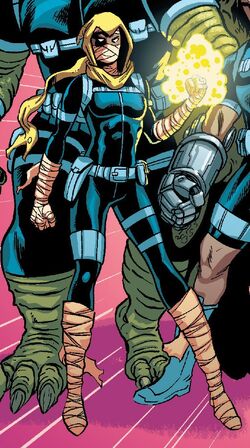 Why do my inner demons have to be real?

Nadeen Hassan was a teenager who had become a beacon that summoned ancient Egyptian spirits.[1] She couldn't control her powers, and accidentally caused the disappearance of a train in the New York Subway.[2]

The Howling Commandos of S.H.I.E.L.D. were sent to investigate, and encountered Nadeen, who warned them of her inability to seize her ability. Vampire by Night managed to enter in Nadeen's subconscious and help her get hold of the spirits, vanishing them.

Nadeen was brought in by Commander Dum-Dum Dugan to Area 13 in order to help her control her abilities.[1] While she still grieved for her predicament, Nadeen befriended the other teenager in Area 13, who was imprisoned next to her, Jamie Carlson, the Teen Abomination.

While she was having a dream about her twin brother Navid, this scenario turned into a nightmare and Nadeen found herself without control of her own body. Navid had possessed her body, in a similar way as he did when Nadeen was in the subway, and stormed Area 13 with Egyptian spirits. After Jamie was forced to knock her down, Nadeen recovered and revealed that when Navid was in her mind, she was able to peek into his, and find out the Howling Commandos were in grave danger.[3]

Due to the chaos she had unwillingly wreaked at the S.T.A.K.E. HQs, Nadeen was imprisoned and tortured in order to learn who did she supposedly work for. After returning from his mission, Dugan was notified of Nadeen's condition and freed her against his superior's will. Dugan welcomed Nadeen as a full-fledged member of the Howling Commandos, and together with the rest of the team, she traveled to New York City to stop the rampage of Navid and his mentor, the Sphinx, in Grandview Museum.[4]

During the ensuing fight, Nadeen discovered that her brother had been possessed by the Adversary, who soon started to change Navid's body to his own image. Using the Mask of Amenhotep, the powerful item the Sphinx and Nadeen were trying to acquire, the Commandos cast the Adversary away, but killing Navid in the process. While her brother died, Nadeen was glad she had finally started getting comfortable with her powers, and had found a place in the world with the Howling Commandos.[5]

Spirit Conjuration: Nadeen has the ability to conjure ancient Egyptian corporeal spirits and make them do her bidding.[2]

Super-Strength Apparently, as a side effect of her powers, Nadeen gained super-strength, being able to easily dent the wall of a containment cell with a single punch.[3]

Mental link: Nadeen's powers are connected to her twin brother Navid Hassan, who has been able to get inside her mind, possess her body and user her abilities for nefarious ends.[3]

Like this? Let us know!
Retrieved from "https://marvel.fandom.com/wiki/Nadeen_Hassan_(Earth-616)?oldid=4967174"
Community content is available under CC-BY-SA unless otherwise noted.