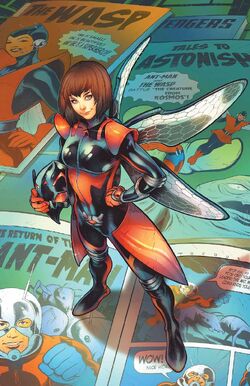 All those years in a cage. This is what it's like to fly. To be free.

Nadia was the daughter of Hank Pym and his first wife, Maria Trovaya, who was kidnapped during their honeymoon and subsequently killed by foreign agents, Nadia was raised in the Red Room in Moscow, Russia, where she was being trained to become a Red Room agent herself.

Her earliest memory is of a man with a star on his arm. When Nadia started to read, she showed great aptitude for science, so her handlers, believing her skills to be genetic, informed her of her famous heritage and began encouraging her to emphasize her studies more. Learning of her parentage only increased Nadia's drive to escape the Red Room, and she was eventually able to obtain a black market Pym Particle sample.[5] Nadia had a young friend named Ying, who helped her in her study of Pym Particles and learned a way to use them; however, she disappeared suddenly and Nadia was told she was reassigned to another project. Nadia attempted to impress her superiors into bringing her back, but they never did.[6] After studying the Pym Particles enough to master their size-changing properties, Nadia used them escape the Red Room.[5]

After her escape, Nadia immediately made her way to the front door of Hank Pym's home in Cresskill, New Jersey, where she discovered that Hank had seemingly sacrificed his life to stop Ultron shortly beforehand. Crushed that her father passed before she could even meet him, Nadia decided to shrink down and break into his lab in order to learn as much about him as she could. Using old Ant-Man suit pieces and materials laying around, she crafted a new costume and decided to become the new Wasp, vowing to earn the admiration of her father's allies.[7]

Nadia decided that she wanted to meet her stepmother, Janet Van Dyne, the original Wasp, and the team that her family helped found, the Avengers, and thus went to introduce herself to the current iteration of the team. Arriving at the Avengers Hangar, Nadia was at first mistaken to be the one responsible for firing energy blasts at their headquarters. After Nadia introduced herself to the team, the Vision, still suffering from the after-effects of Mr. Gryphon's control, started to pop in and out of the timestream. The energy blasts that were attacking the Avengers earlier were time-displaced from the moment he tried to hit Nadia when she arrived at their headquarters.

As the Avengers tried to figure out a way to help their friend, the Vision's solar powers started to go superthermal, transforming him into a living bomb that would destroy the entire hangar and everyone inside it. Ignoring Tony Stark's order to retreat, Nadia flew inside the Vision to plant explosives, which she detonated, causing his temperatures to normalize and seemingly saving his life. Having earned their trust, Nadia was taken by Edwin Jarvis on a road trip in which he would introduce her to her extended family tree.[5]

Jarvis and Nadia next went to Long Island and meet Janet in Southampton, though they had to rush due to the threat of a Microverse bomb. Together, Nadia and Janet defused the weapon, saving the President of the United States. Realizing how out of touch Nadia was with the real world, Janet took her out for a day out before admitting that, while she'd fight to the death to keep the name, she was fine with sharing it as long as Nadia used it for good.[8]

Returning to Janet's home, the two Wasps had to deal with W.H.I.S.P.E.R. agents disguised as members of the Russian Consulate; however, news of Bruce Banner's death at the hands of Hawkeye was soon revealed, devastating Nadia. She decided to try to stop the impending Civil War by using her Microverse-based lab to construct a device so that Ulysses could focus his powers; however, the device went critical and Janet, having raced in to stop her, was forced to pull her out. Devastated further, Janet had to tell Nadia that not everything can be fixed by applying science and this was something that had to be fixed through personal means, despite the fact that it felt like she was losing her friends. While Nadia slept, Janet admitted to Jarvis that her innocence and drive was a refreshing thing and that she was proud to have her as a Wasp.[6]

In the aftermath of the second superhuman Civil War, Nadia joined the Avengers and Ms. Marvel accompanied her to the United States Citizenship and Immigration Services in an effort to help sort her naturalization issues. After the meeting with Deborah Forrester, the pair assisted Mockingbird in taking down Monica Rappaccini, and although the Scientist Supreme escaped, Nadia gleefully spent time with Bobbi, whose work on Project: Gladiator and adventures in the Savage Land had inspired her as a child. After mentioning that S.H.I.E.L.D.'s list of most intelligent humans listed women no higher than 27th, Nadia was prompted to start G.I.R.L., an enterprise to assess the Earth's greatest female scientific minds and convince S.H.I.E.L.D. that their list was outdated and in need of revision.[2]

Nadia established her residence at Hank's former home, researching young women geniuses in the tri-state area to recruit into her G.I.R.L. initiative, with Jarvis helping her keep her schedule of affairs in order. Nadia traveled to Washington Heights and recruited sisters Alexis and Taina, but could not recruit Moon Girl even after a superhero team-up, the aftermath of which led Nadia to find her Red Room friend, Ying; who vanished after explaining her orders from Mother to bring Nadia back into the Red Room. After Nadia got a new phone and first met Amber, she and Jarvis travelled for Brownsville and recruited Shay Smith, but found trouble convincing Priya Aggarwal to join; as Priya wanted to be "normal" as her brother's exceptionalism led to his loneliness.[9]

When the shop Priya worked at was being robbed by Pouncakes, Nadia talked her down until Jarvis encountered Letha outside and fighting broke out. When Nadia lost her composure and utilized her assassin training to subdue both criminals, Priya agreed to join in gratitude. The next day, after an awkward first encounter, Nadia's lawyer stated that there was no DNA of Hank left to verify she is his daughter, complicating her naturalization case. So he petitions Asylum for her that she is protected while Nadia detail events of the Red Room until her lineage is proven.[10]

After Sam Alexander, Miles Morales, and Kamala Khan left the Avengers to found the Champions,[11] Nadia stayed with the team, who also recruited Hercules to bolster their ranks. They were then invited by Peter Parker to Parker Industries' main headquarters, the Baxter Building, where Peter offered them a new base of operations outside of the old hangar; however, Nadia finally realized that Peter was connected to Spider-Man and grew immediately distrustful of the businessman due to her distrust of Spider-Man.[12]

After being rescued from having been erased from time by Hercules, Nadia took the infant Kang and used his adult self's time-travelling tech to escape into the timestream to return the baby to its proper place in history.[13] During her chase, she was plucked out by the Priests of Pama from the 26th Century, who had evolved into paradox eaters after Kang's attack on the group searching for his younger self in the past. They attempted to convince Nadia to sacrifice the baby to them so that all of his future crimes would be undone; however, Nadia refused and instead plunged herself back into the timestream to rescue the Avengers murdered by Kang and drawing the attacking time-travelers to the Priests. The Avengers were then able to successfully return the child to his time and was thanked by the Avengers for her work, though the Vision told her a shocking secret.[14]

Size Reduction: Because of the Pym Particles in her bloodstream, Nadia could reduce herself in size, usually down to a few inches, at which size she is not easy to notice,[7] though she has no issue shrinking further.[6]

Size Addition: In addition to being able to shrink, Nadia can grow in size as well. Though she seldom enlarges herself, she has exhibited unique combat skills based upon this power, such as throwing her helmet and increasing its mass prior to impact.[10]

Genius Intelligence: Nadia has a great aptitude for science. Her handlers at the Red Room, believing her skills to be genetic, informed her of her famous heritage and began encouraging her to emphasize more on her studies.[5]

Martial Arts: Nadia, like all the students of the Red Room Academy, is trained in multiple forms of hand-to-hand combat,[5] including Krav Maga.[10]

Graceful Dancer: Nadia was taught various types of dance in the Red Room.[2]

Tactician: Nadia is a very effective strategist and tactician, capable of devising a plan to easily overpower multiple assailants with minimal effort.[10]

Mental Difficulties: Nadia suffers from a an officially diagnosed case of Bipolar Disorder. These are signified by Manic episodes of incredible highs followed by near-or-at suicidal lows. Janet first noticed the symptoms upon spotting a set of notes, though only had Hank's situations as reference.[16] Upon the end of her manic episode, Nadia requested Janet to take her for help, which she agreed to.[17]

Like this? Let us know!
Retrieved from "https://marvel.fandom.com/wiki/Nadia_Van_Dyne_(Earth-616)?oldid=6046955"
Community content is available under CC-BY-SA unless otherwise noted.