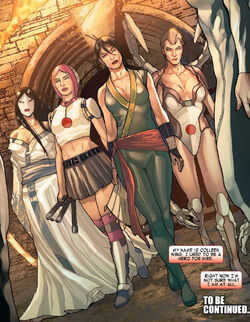 Editorial Names
Daughters of the Shadow

Base of Operations
Shadowland Fortress
Affiliation
The Hand
Affiliations

The original Nail were five women ninjas that served the Hand as an elite strike team for thousand years.[1]

In modern era, Azumi Ozawa revived and led the team along with four other descendants of the original Nail,[1] which included Black Lotus's mother.[2]

Enemies of the Hand eventually discovered their identities and killed them one by one.[1]

During the events of Shadowland, Daredevil reformed the team with Colleen Wing (Azumi's daughter) as their leader.[1]

Colleen eventually left the group along with the youngest member Cherry Blossom. The other members stayed on as members of the Hand.[3]

Retrieved from "https://marvel.fandom.com/wiki/Nail_(Earth-616)?oldid=5741691"
Community content is available under CC-BY-SA unless otherwise noted.