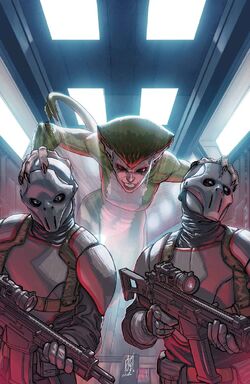 Naja was a Nuhuman who helped Inferno and Flint sneak back into New Attilan to check on Inferno's sister, Gabriela after the Unspoken usurped the throne from Queen Medusa. With help from Vinatos, Naja and the others faced the Unspoken in battle and were able to beat him after Flint destroyed the Terrigen Crystals. In his weakened state, Naja knocked him out.[1]

When the Kree Empire began ordering all surviving Inhumans to join it or perish, the empire launched an attack on the Inhuman city of New Arctilan on the Earth's Moon. During the attack, Naja was captured[2] and placed in stasis in an unknown location along with other Inhumans.[3]

Naja is the name of a group of snakes more commonly known as cobras.

Like this? Let us know!
Retrieved from "https://marvel.fandom.com/wiki/Naja_(Earth-616)?oldid=5993502"
Community content is available under CC-BY-SA unless otherwise noted.