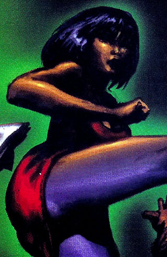 Nakia was descended of a gentle fisherman of Q'Noma Valley in the African nation of Wakanda. From an early age, she was groomed, as many girls are, to be one of the "Adored Ones," an order of women known as the Dora Milaje and serving as concomitants or wives-in-training for the king of Wakanda. The order of the Dora Milaje was established to promote harmony between Wakanda's many rival tribal factions. They also perform the role of the king's deadliest bodyguards and most faithful, most trusted servants.[2]

By age 14, Nakia was accepted into the order, and spent the rest of her life growing up in the Royal Palace of Wakanda enjoying a childhood most native tribalists could only dream of. During this time, she became increasingly obsessed with her king, the hero known as the "Black Panther", fantasizing openly about marrying him. At one point, she even threw herself fifty feet into a shallow pool to get her king's attention. The Panther administered mouth-to-mouth resuscitation to revive her, to the young teen's delight.[3]

Although the order entitles the king to complete rights to his concomitants, the Black Panther has always viewed the order as largely ceremonial and has made no demands of them. He inadvertently broke this arrangement when he kissed Nakia while under the influence of illusions cast by Mephisto.[4] This caused Nakia's infatuation with T'Challa to grow to irrational levels of fantasy. She attempted to kill his former girlfriend, the American Monica Lynne, by ejecting her from a plane during a war zone. Nakia lied to the Panther that Monica was dead, but he immediately saw through her. Nakia was then dismissed from her duties in disgrace and would thus be forever shamed, shunned by her tribe and by all of Wakanda.[5]

In fleeing the palace during a rainstorm, she crashed into an old monastery where she was captured by the Panther's enemy, Achebe. Achebe brutally tortured Nakia and left her to die. However, another of the Panther's enemies, Killmonger, happened upon her. Killmonger used arcane methods and the mystical Altar of Resurrection to restore Nakia's health, and the process granted her increased strength and flawless accuracy. Killmonger gave Nakia a new name, Malice, after a former protégé of his.[6]

Malice developed an arsenal of weapons and access to the toxic herb called Jufeiro, which makes men become as obsessive about her as she is about the Black Panther. To begin her revenge, Malice sent a cryptic message to the Wakandan Consulate consisting of just two words "She's Dead." The Black Panther, who once taught high school in Harlem, began an investigation of a missing girl who happened to be one of his former students. The Panther discovered this to be the handiwork of Malice, and he believed many of the women in his life, including Ramonda, his step-mother, M'Koni, his cousin, Okoye, his chauffeur, Queen Divine Justice, the newest Dora Milaje member, and Monica Lynne to be potential targets of Malice's wrath.[7]

While the Panther tracked Malice, he hired the private investigator Dakota North to watch over Monica Lynne. Dakota believed, however, that the Black Panther had fallen under Malice's control. She decided to go after the Panther himself and ended up ruining his well-laid plan to capture Malice. Malice thus captured the Panther instead, and soon freed the malevolent Man-Ape, who went on to ambush Queen Divine Justice and Ramonda during their flight to the United States. Ultimately, however, the Black Panther revealed that he had all the angles covered all along, that he was stringing Malice along in order to save Malice's dying victims, which included Maria, the former student of his Harlem alter ego.[8]

In the final showdown, the Black Panther threatened to destroy Malice's tribal village back in Wakanda if she would not give him the antidote to save her victims. Malice relented, knocking Panther off a speeding truck just before she vanished without a trace.[9]

Nakia was later seen aiding and assailing Secretary Ross just as a Wakandan diplomate was killed in Brooklyn, New York and a climate control device he was ferrying went up in flames. Malice, though estranged from King T'Challa, went looking for Everett Ross because it became a hot topic that the tech data for the now ruined device schematic was still at large. Both she and Hunter knew the king to have trusted Ross implicitly, more so than anyone else in the realm. To that regard, Malice sought to kidnap him in order to extract that information, but was beaten to it by the White Wolf and his War Dog contingent. After realizing he never even had the device data to begin with, she eventually let him go; disappearing to parts unknown after a while.[10]

When next seen, the ex-adored one was looking worse for wear. Due to her overuse of the Jufeiro Herb cause a form of cellular deterioration to occur which resulted in premature aging, hence her haggard and horribly aged appearance. Feeling she was on the cusp of dying Malice sought out a secret weapon stolen from the Dora Milaje by A.I.M..[11]

A potential WMD created from Living Vibranium, guided and corralled via Wakanden designed drum set called the Mimic 27, she encountered Hydro-Man on her incursion of the abandoned A.I.M base and hit him with her Jufeiro herb. Making him act as a kind of watchdog in case anyone were to follow her trail. Malice sought to use the Mimic to cause as much havoc as possible while in Bedford-Stuyvesant, Brooklyn to grab the Panther's attention with it. Instead she caught the eye of Spider-Man, one of the local heroes of the city as well as the attention of Ayo, Aneka, and their leader Okoye when the Mimic pinged on their radar.[11]

Due to a magical ritual, Nakia possesses increased levels of strength, speed, and accuracy.[7]

Nakia is adept at hand-to-hand combat.[12]

Like this? Let us know!
Retrieved from "https://marvel.fandom.com/wiki/Nakia_Shauku_(Earth-616)?oldid=5744452"
Community content is available under CC-BY-SA unless otherwise noted.