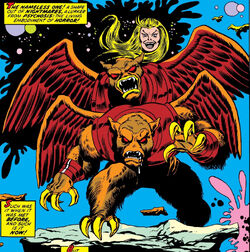 The Nameless One was the leader of an ancient race of demons known as The Undying Ones who ruled the Earth millennia ago. Eventually, their power waned and they were forced to return to their own dimension. In modern times they were temporally able to reach our dimension and attempted to invade Earth, but Dr Strange and Namor managed to stop the invasion. However, Doctor Strange was left trapped in the Nameless One's dimension.[1]

A second Nameless One has since appeared, and it was thought for years that he was killed for his failures; however, when the Defenders reformed, he was shown to be alive and once again appeared to be in control of The Undying Ones. He was once again defeated by his old foes when he attacked Earth. After his most recent failed invasion, his current fate is unknown.

The Nameless One has vast superhuman strength at or near class 100 strength.

Can temporally be weakened by crossing into our dimension.

The Nameless One can use his wings for transportation and can travel to other dimensions at certain times.

Like this? Let us know!
Retrieved from "https://marvel.fandom.com/wiki/Nameless_One_(Undying_Ones_Leader)_(Earth-616)?oldid=6444566"
Community content is available under CC-BY-SA unless otherwise noted.