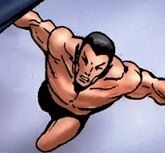 The past history of Namor was seemingly identical to that of his Earth-616 counterpart up until Nova chose to stay with Namorita instead of breaking up with her.

Seemingly those of Namor of Earth-616

Seemingly those of Namor of Earth-616

Like this? Let us know!
Retrieved from "https://marvel.fandom.com/wiki/Namor_McKenzie_(Earth-10333)?oldid=4482657"
Community content is available under CC-BY-SA unless otherwise noted.