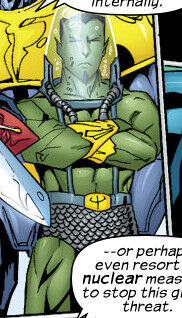 As a member of The Invaders, Namor was almost called in to help defeat King Hyperion when he murdered the Fantastic Five and the Avengers on their world.[citation needed]

Seemingly those of Namor McKenzie (Earth-616)#Powers.

Like this? Let us know!
Retrieved from "https://marvel.fandom.com/wiki/Namor_McKenzie_(Earth-4400)?oldid=5918939"
Community content is available under CC-BY-SA unless otherwise noted.