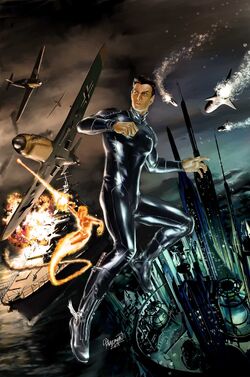 While Namor was still in the womb, King Thakorr sent his troops to retrieve the runaway Princess Fen, while on a ship in the Antarctic. Fen took a shot intended to kill her husband, Leonard McKenzie. He was able to kill the Atlanteans and traveled to Honolulu to hide, where Fen survived for an unknown period of time, and gave birth to Namor before dying. Leonard raised the boy on land, hiding his true nature from the world to protect him from being killed by the Atlanteans. However, Namor was discovered when he was in his early 20's and King Thakorr asked Leonard to speak to him. Thakorr asked Namor to return to Atlantis, but Namor refused as Leonard watched. During their conversation, Pearl Harbor was attacked by the Japanese, Leonard was killed in an explosion. During World War II, Namor fought alongside America and the Human Torch. During one mission at sea, their ship was attacked and the Human Torch was killed, his last words being "Namor" and his body was lost at sea. Meanwhile, Atlantis was discovered by the Nazi's and they created the Wasserreich and division of half-human/half Atlantean hybrids and conquered Atlantis and enslaved King Thakorr and his true Atlanteans, and at some point retrieved the body of the Torch. 30 years later, a signal was found calling Namor's name and Namor investigated and discovered the Nazi ruled Atlantic and the body of the Torch. The Nazi's attempted to trigger an explosion of the Torch and kill the surface. But Namor managed to get the Torch out and save his people. Namor stayed with his grandfather in Atlantis. The United States military deemed the Nazi threat too great and blew up Atlantis, killing many and seemingly leaving only Namor alive. [1]

Seemingly those of Namor McKenzie of Earth-616.

Like this? Let us know!
Retrieved from "https://marvel.fandom.com/wiki/Namor_McKenzie_(Earth-717)?oldid=5761606"
Community content is available under CC-BY-SA unless otherwise noted.