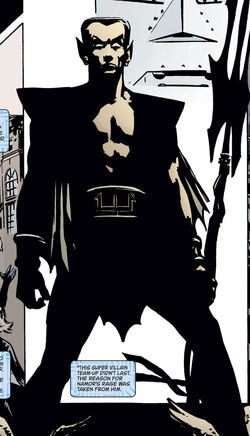 The history of Namor of Earth-9997 mirrors that of his Earth-616 counterpart. In recent history on Earth-9997, the release of Terrigen Mists into Earth's atmosphere not only mutated the entire human race but created a series of political and economic upheavals that sent the Earth into a state of chaos. Among these problems was a global food shortage due to massive consumptions of living animals on land. As such, in order to feed people, the nations of the world began to rely more heavily upon sea life as a source of sustenance. This soon earned the anger of Namor, which was further amplified by a special UN meeting about the food shortage, which Namor was not included in.
Deciding to capitalize on the situation, Dr. Doom manipulated Namor for his own ends, goading him into attacking the United Nations with him. During the slaughter of UN delegates, the duo were interrupted by the arrival of the Fantastic Four and Captain America. While Cap tried to talk Namor into dealing his grievance in a peaceful matter the Human Torch attacked Namor head on. The resulting fight, led to the Torch's death. Mortified that his uncle was murdered right before his eyes, Franklin Richards would use his powers to curse Namor to forever burn whenever he was above water. With half his body lit aflame, Namor would flee into the oceans.
Namor would resurface years later when the Skull was taking dominion over the United States. While harvesting massive quantities of fish to feed his army, the Skull earned the wrath of Namor who attacked the Skull's army. The fight was short lived however, as Namor soon became yet another slave to the Skull's power and was forcibly made a member of his army. Namor would travel across America with the Skull's army.[citation needed] Their last stop was in America, where Namor was used as a defense against Captain America and an army of super-heroes gathered from around the globe to stop the Skull. During the fight, the severely weakened Namor (Who had been out of water the entire time) was easily defeated in battle. Feeling sorry for his opponent, Czar Colossus took the defeated prince to New York harbor and dropped his body in, Namor's contact with the water would ultimately revitalize him. Following the death of the Skull, the Celestials would arrive on Earth, and Namor would recruit an army undersea creatures to attack the Celestials in revenge for his ancestors who perished when the Second Celestial Host came to Earth and sunk Atlantis centuries before. Namor's attack was ineffectual, and most of his sea creatures were destroyed, however his attack bought the Earth precious moments needed for Galactus to arrive and fight off the Celestials.[citation needed]

When Mar-Vell was reborn through the mating of Him and Her, Her was captured by the Tong of Creel. Mar-Vel who was reborn as a pure human (not with the genetic manipulations caused by the Celestials) would become a target by those who believed his coming would mean the end to their super-human powers. Reed Richards would turn over the infant Mar-Vell to the one person everyone least expected him to give the baby to: Namor.
Namor would take the baby Mar-Vell, along with Agatha Harkness, to Atlantis where he would protect the growing Mar-Vell for the next three years. When the Thing came to collect Mar-Vell it led to a brief battle between Namor and the Thing. The battle was ended when the Thing accidentally freed some of Namor's old foes, who damaged his diving suit, necessitating Namor to save Ben's life.
After Namor hand delivered Mar-Vell to Reed, he would depart in shame knowing that Mar-Vell intended to use his knowledge to restore Susan Richards to life.
Following the death of Captain America, Namor was present at his funeral. He would later join a group of heroes who would join up in Mar-Vell's quest to collect items of power to create Paradise in the Realm of the Dead. He would be present when the group recovered Psycho Man's emotocaster from Hel Laboratories, the Reanimator stone from Egypt, the Ultimate Nullifier from the Moon, the Cosmic Cube from Wakanda, the High Evolutionary's Transmogriphication device from Wundagore Mountain, and Kyle Richmond's eyes. Along the way Namor would fight the army of Wendigos, Belasco and an army of Dire Wraiths and the Tong of Creel all before the Tong managed to revive the Absorbing Man and unleash him upon the world. Namor would battle Absorbing Man while he literally absorbed all of New York. The heroes ultimately won this battle when they convinced Creel to save the Earth by turning into Vibranium and replace the amounts of the element that were destroyed when Galactus killed the Celestial embryo growing in Earth's core years earlier.[citation needed]

Following the death of Death, and the creation of Paradise in the Realm of the Dead, nobody on Earth was able to die and vast hospitals were built to house the undying. Namor travelled to the one in Latveria where he sought Stephen Strange and asked him to use his magic powers to reverse the curse that Franklin Richards placed on him all those years ago. Strange complied, using a spell that would counteract the flames. Free of his curse, half of his body remained horribly scarred, Namor thanked Strange for his help. Following this, Namor's current whereabouts are unknown.[citation needed]

Prior to being cursed by Franklin Richards, Namor retained the same abilities as his Earth-616 counterpart. In recent times, he has been cursed by Franklin Richards. The curse causes half his body to burst into flames whenever he is exposed to air. It is unknown if he has any sort of control over the flame in the same way that the Human Torch did, however this is doubtful. While the flames have permanently scarred Namor, they do not appear to cause him enough pain to incapacitate, nor do they do more than burn the scarred surface of his flesh.
This curse has since been counteracted by a magic spell cast by Dr. Strange.

Like this? Let us know!
Retrieved from "https://marvel.fandom.com/wiki/Namor_McKenzie_(Earth-9997)?oldid=5443659"
Community content is available under CC-BY-SA unless otherwise noted.