This page documents Namorita until her death at the Stamford incident which triggered the Civil War.
For the Namorita currently present on Earth-616, please consult this page.
Namorita 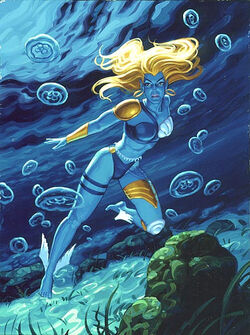 Namorita was born over 30 years ago[6] to Namora, half-human cousin of Atlantis's Prince Namor. Unknown to her husband Talan, Namora became pregnant via genetic manipulation by Atlantean scientist Vyrra, who implanted her with her own clone (infused with genes from Atlantis's greatest warriors). Talan died when Namorita was three, and she and Namora relocated to Lemuria. Eventually Namora was poisoned by her rival, Llyra, when Namorita was still a pre-adolescent. Llyra assumed the throne of Lemuria soon after, and Namorita remained in her care, suspecting her of Namora's supposed death but unable to prove it.[7]

When Namor reunited with the cousin he had not seen since her infancy, he entrusted her welfare to his longtime surface friend, Betty Prentiss. Under Prentiss' guidance, Namorita attended high school and college. Namorita eventually considered Betty to be her second mother and took her last name when she died. Annie Christopher was her college roommate. For a time they cared for Wundarr when he had childlike intelligence,[8] and briefly joined his spiritual movement, the Water Children.

While a student attending Empire State University, Nita found herself coincidentally at the site of the reborn Terrax. She was forced into action, and was soon joined by a group of other teen heroes. This group became the New Warriors. As a founding member of the team, she played an important part in their quest to "change the world". Namorita frequently brought ecological concerns to the team's attention.[9]

Nita also spent time with her cousin, Namor, who had recently returned to the surface world and started his own company, Oracle Inc.[10]

While operating on her own Namorita confronted Sea Urchin, who was looting Atlantean property from the seabed. She came very close to killing him after an initial conflict in which he scalped her, and was left seriously wounded physically and emotionally for some time after their encounter.[11]

Trouble with the Team

After Night Thrasher abandoned the New Warriors to pursue his own goals, Namorita rose to become the team's new leader.[12] She supported the team with her own money with also supervising Oracle, Inc after Namor went missing.[13][14]

Nita has two great regrets from her time with the team. The first was the team's mission to Trans-Sabal. In this nation, the Warriors found themselves involved in an armed insurrection, forced to choose sides. At one point, Nita was in a position to prevent one of the army leaders from being killed, but because of the situation (Aqueduct was aiming at Halladah who was aiming at Mezdbadah) she could not decide how to act, and allowed Halladah to be killed by her inaction.[15]

The second time Nita regrets to have messed up was during the "Poison Memories" crisis. Night Thrasher had gotten on the wrong side of a gang called the Poison Memories. One night, Nita drank too much and wound up sleeping (unknowingly) with a member of that gang. He used his access to her apartment to steal all the personal data she had on the Warriors, and arranged the kidnappings of her teammate's family. In the course of the Mems' missions, Rage's Granny Staples was murdered, Firestar's father was shot, and Nova's younger brother had a finger cut off.[16]

Namorita underwent great emotional turmoil after the Trans-Sabal and Poison Memories incidents. She had been experiencing emotional difficulty, and directly after the Poison Memories affair was over, left the team.[17] She went to her home of Atlantis, and there learned that her emotional problems were the result of physical change: When the doctor had originally cloned Namora, he had spliced in genetic codes from ancient Atlantean warriors, the idea being to prevent Nita from undergoing the same difficulty of being a hybrid that her mother faced. However, those dormant Atlantean genes were re-activated by Nita's physical and emotional stress, and it caused her to transform into the blue-skinned Kymaera (which means "ghost-shark"). She and Nova officially began a relationship with one another after Nita returned to the Warriors.[18]

Justice became roommates with Nita for a short time after his release from prison.[19]

During a relief mission in Africa, the New Warriors were captured by a para-military organization called Undertow, and their operatives, the Soldiers of Misfortune. The Soldiers were actually helpless puppets, superhumans captured and mind-controlled by the Undertow military. Undertow attempted to do the same to the Warriors, but Nova arrived with the reserve Warriors to stop the process. Unfortunately, all the Warriors were rescued except Namorita, who remained in Undertow's control.[20]

Made part of a Soldiers' pairing, Hard and Fast, Nita was forced to battle her own teammates.[4] She was eventually rescued by Night Thrasher and Rage, and freed of her mind control. She rejoined the Warriors and renewed her relationship with Nova.[21]

Nova and Nita continued their relationship, but it fell apart later when Nita began undergoing the next change in appearance/powers, and needed Rich's support, he turned away from her because of his own personal problems. When her appearance stabilized as the classic "Namorita" look, she slept with Bernie Dillon to get back at his best friend Nova.[22] She did not forgive Rich for a long time, and pursued a relationship with the Human Torch of the Fantastic Four.[23]

Johnny Storm peripherally knew Namorita through her cousin's contact with the Fantastic Four. The two dashing young heroes (and popular tabloid topics) began a very public relationship. Nita became somewhat of a "tag-along" with Johnny's team. She would accompany them on a number of missions,[24] but eventually the couple broke up.[25]

Bolt was Namorita's next roommate.[26]

During a televised raid by the New Warriors of a building in which Cobalt Man, Speedfreak, Coldheart, and Nitro resided, Namorita followed after Nitro. Slamming him into a bus, Namorita taunted him, which made him let off a massive explosion that killed the New Warriors (save for Speedball, whose powers caused him to be launched away by the blast), all of the children at the nearby elementary school and almost all residents in the surrounding neighborhood where the fight took place.[5]

Trained in Atlantean combat methods and fluent in English, Atlantean, and Lemurian languages.

Class 75; Namorita can lift up to 75 tons when well hydrated.

Namorita wore the Atlantean Blood-Code Carapace after a humiliating defeat by Sea Urchin. Atlantean tradition states that the armor should only be worn when one intends to kill their foe.[11]

Like this? Let us know!
Retrieved from "https://marvel.fandom.com/wiki/Namorita_Prentiss_(Earth-616)?oldid=6108727"
Community content is available under CC-BY-SA unless otherwise noted.