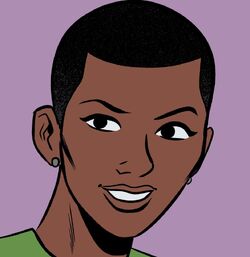 There are three things you can do to get me to hate you, Doreen: make fun of my last name, criticize how I decorate, or talk smack about Mew.

During an attempted armed robbery at the campus' bank, which was thwarted by Squirrel Girl, Nancy deduced her roommate's secret identity due to the fact that one of the rodents she was using was Tippy-Toe, Doreen's pet.[4] Later that day, Nancy confronted Doreen regarding her heroic alter-ego, and became her confidante.[5] Since then, she has helped Doreen in several adventures.

Communication with Squirrels: Due to lessons from Squirrel Girl, Nancy has learned to communicate with squirrels.[7]

Like this? Let us know!
Retrieved from "https://marvel.fandom.com/wiki/Nancy_Whitehead_(Earth-616)?oldid=5712346"
Community content is available under CC-BY-SA unless otherwise noted.