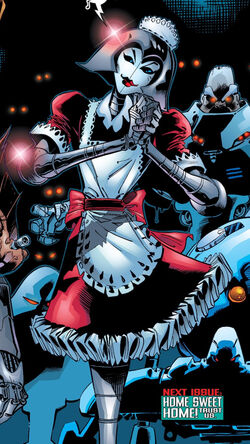 When Magneto was reduced to an infant by the powers of his own creation, Alpha the Ultimate Mutant, and was left in the care of the X-Men's ally, Moira MacTaggert. Once he was returned to adulthood, Magneto chose to turn the tables on the X-Men. He strapped them in special chairs that reduced their motor functions to an infantile state, forcing them to rely on his robot, Nanny, to care and feed them.[1]

Nanny later resurfaced at one of Magneto's bases once the X-Men returned from the Shi'ar/Phalanx War.[2] She held Gambit, Joseph, Rogue, Grovel, and Spat powerless captives. When they escaped, she confronted them with the intent to kill them.[3]

Nanny transformed. The familiar features of the feminine robot in a french maid's uniform changed to those of a combat robot. Her eyes glowed, her artificial hair were replaced with long sharp tacks, her arms were now metallic fists with spikes, and her lower party was transformed to a giant mace-like Wheel. She seemed deadly. She was decapitated with a crowbar from Trish Tilby, the only X-Men ally she failed to account for.[3] Once "dead," her device negating mutant powers stopped working. The powers of the nearby mutants returned.[3]

Nanny appeared among the Robotic equalist terrorist group the Descendents. She was charged with the care and education of their messiah Parvez, this was ended by Agent Venom and Black Widow.[4]

An iteration of Nanny was seen attending to Magneto's wounds on his reconstituted Asteroid M base.[5]

Like this? Let us know!
Retrieved from "https://marvel.fandom.com/wiki/Nanny_(Magneto%27s_Robot)_(Earth-616)?oldid=6431314"
Community content is available under CC-BY-SA unless otherwise noted.