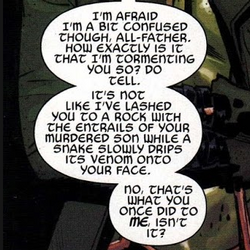 Loki recalled the death of his son and subsequent torture of his former self at the hands of All-Father Odin,[1] then was further reminded of the chains used to bind him having been forged from his slain son's entrails by the Children of Eternity known as Then and Now.[2]

Like this? Let us know!
Retrieved from "https://marvel.fandom.com/wiki/Narvi_(Earth-616)?oldid=6007618"
Community content is available under CC-BY-SA unless otherwise noted.