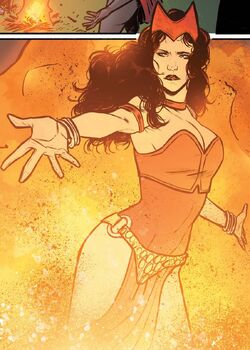 Natalya Maximoff was the mother of Quicksilver and Scarlet Witch who seemingly perished attempting to rescue the twins after they were kidnapped by the High Evolutionary and taken to Transia.[2] Her title, the Scarlet Witch, which her daughter inherited, had been passed down throughout the history of her family. While much of her history is unknown and her existence is believed to be a myth, there were some that knew about her including Ulysses Bloodstone and the Eternal Makkari.[3]

Wanda first encountered her mother as a spirit when traveling down the Witches' Road with the spirit of Agatha Harkness while investigating mysterious magical attacks on Ireland.[4] Wanda instantly realized that Natalya was her biological mother but, since time can be "vague" on the Witches' Road, Agatha advised Wanda that Natalya could be from the past so she should avoid giving Natalya any foreknowledge that might change history. Keeping their relationship a secret, Wanda had a short conversation with Natalya while getting the chance to witness her mother's magic power in action as she easily dispatched an evil creature identified as a Phooka. Eventually, Natalya vanished as she started to realize her connection to Wanda but her last words before vanishing confirmed that she was from a time before Wanda had even been born.[3]

Later, Wanda's search for the truth about her mother led her to Serbia where she encountered Dasha Koralov, Natalya's best friend, who brought Wanda to where her supposedly-dead adoptive mother, Marya Maximoff, lived.[2] During their reunion, the bodies of Marya and Dasha were possessed by a pair of witch-demons but Wanda, with help from Agatha, exorcised them. Once that was done, Natalya's spirit briefly borrowed Marya's unconscious body so that she could speak with Dasha and tell Wanda that the answers she sought were to be found on the Witches' Road and that she must walk it to the end, further than any witch had ever gone. As the brief time that she could manifest ended, Natalya used her magic to heal Marya's burn-scarred face and restore her beauty.[1]

Acting on her mother's advice, Wanda then returned to the Witches' Road to continue her quest to heal the sickness ailing the source of her power. While there, Natalya and Agatha aided her in moving beyond the past which haunted her.[5] At the end of the Witches' Road they encountered Aimless Ones, who attempted to distract the trio long enough for the Abstract Entity Chaos to kill the Goddess of Witchcraft. The witches three combined their magic to drive Chaos away; however, the Goddess had been wounded sufficiently that she continued to die. Natalya then sacrificed her soul and individuality to save Witchcraft, but not before revealing that it was Wanda's own father, not the High Evolutionary, who had killed her all those years ago.[6]

Sorcery: The ability to tap this universe's infinite store of ambient magical energy and manipulate these to a variety of effects. A skill derived from three major sources: personal powers of the mind/soul/body, powers gained by tapping the universe's ambient magical energy and employing it for specific effects and finally, powers gained through the tapping of extra-dimensional energy by invoking entities or objects of power existing in mystical dimensions tangential to her own. The latter means of power is usually gained by the recitation of incantations. Some of these effects include forming magical energy bolts with a high degree of potency and control, erecting energy shields or screens with a high degree of durability to both physical and magical damage, creating illusions, levitation, and astral projection.[3]

Like this? Let us know!
Retrieved from "https://marvel.fandom.com/wiki/Natalya_Maximoff_(Earth-616)?oldid=6513363"
Community content is available under CC-BY-SA unless otherwise noted.