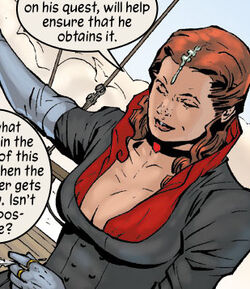 Natasha is a freelance spy and "the most dangerous woman in Europe". Initially allied with Matthew Murdoch, she later betrayed him to Count Otto von Doom and became his lover.[2] When Nicholas Fury and his allies attack Doom's castle, Natasha planned on leaving and stealing some of Doom's valuables. She was then knocked unconscious by Susan Storm and later discovered Doom with his entirely scarred face.[3]

After Doom's debacle in procuring the fake treasure which scarred his face, Natasha was still serving with him during the kidnapping of William Shakespeare, and served as his captain of his flying ship. However, when she questioned his plan to take the ship to the edge of the world, he pushed her over the side, plunging to her death, and appoints the Wizard as captain.[1]

Like this? Let us know!
Retrieved from "https://marvel.fandom.com/wiki/Natasha_Romanova_(Earth-311)?oldid=5281339"
Community content is available under CC-BY-SA unless otherwise noted.