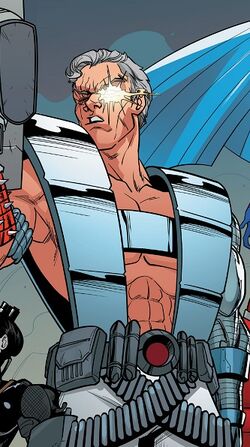 Cable is a mutant and a gun-toting mercenary, who sought to bring down the corrupt government of Genosha, which was ruled by a former colonel now calling himself the Leader. Cable was once part of the Leader's army until he discovered that the Leader was not true a champion of democracy. Cable threw his wages back in the Leader's face and took to the hills, causing trouble ever since.

Cable helped rescue Gambit from some Genoshan guards and then gave him a key to remove the control collars that dampened the powers of the mutant slaves. He infiltrated the island's Sentinel factory, destroying many Sentinels, and then confronted the Leader on a bridge. Cameron Hodge pulled a gun on him, but then floodwaters from a nearby burst dam washed the three of them away. Cable laughed as the wave hit them.[1]

Shortly afterwards, Cable attempted to track down the doctor who had invented Genosha's mutant suppression collars: Gottfried Adler. He believed that Adler posed a threat to all mutants, and had to be killed. Cable managed to track the doctor down to Warren Worthington's mountain chalet, where he briefly fought Warren and learned that Adler was on Muir Island in Scotland. On Muir Island, he kidnapped Adler only to learn that the real Adler was dead and that he had in fact kidnapped the shape-shifting mutant Mystique. Following a skirmish with the X-Men (Cyclops, Jean Grey, and Rogue), Cable plummeted into the water below and disappeared.[2]

Cable was hinted to be the future son of Cyclops and Jean Grey. When Jean read his mind, she told Cyclops that Cable was important to her and Cyclops' future, and when Cable asked his computer for information about the X-Men, he said that he already knew everything about Cyclops and Jean Grey and told his computer to skip their files and proceed to the files of the other members.[3]

Seemingly those of the Nathan Summers of Earth-616.

Like this? Let us know!
Retrieved from "https://marvel.fandom.com/wiki/Nathan_Summers_(Earth-13393)?oldid=6075807"
Community content is available under CC-BY-SA unless otherwise noted.