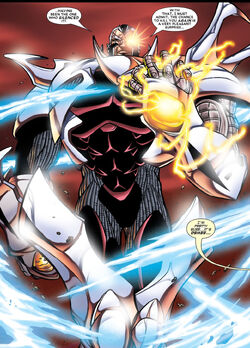 When Apocalypse started his plans for world domination, he captured four people who he saw as being good enough to be his Horsemen and corrupted them. Cable became the Horseman known as War, and mentioned that he murdered his world's version of Deadpool and is responsible for genocide on Earth.[1]

When Deadpool, Cannonball and Siryn started searching for Cable in the multiverse, they were brought to Earth-5701 and encountered the Horsemen of Apocalypse. They managed to defeat Pestilence, Famine and Archangel, however, they then encountered and fought Cable, who easily managed to defeat them. Realizing that he could not defeat him, Deadpool bodyslided away, followed by Cannonball and Siryn three minutes later.[2]

Seemingly those of Nathan Summers of Earth-616.

Like this? Let us know!
Retrieved from "https://marvel.fandom.com/wiki/Nathan_Summers_(Earth-5701)?oldid=5580393"
Community content is available under CC-BY-SA unless otherwise noted.