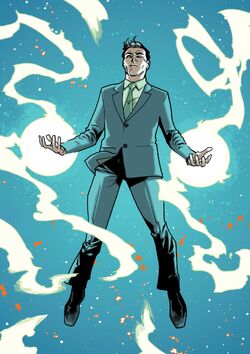 As a consequence of a glitch in the timestream, Kang the Conqueror was split apart into different versions of himself. One of these versions became trapped in the early 21st century, held back by some kind of "firewall of time."

Unwilling to wait for two thousand years to catch up with his original era, this Nathaniel Richards decided to create his own dynasty in this time period. Under the alias of "Mister Gryphon," Kang became a businessman and the CEO of Qeng Enterprises. He additionally enlisted the help of several villains to make his empire grow.[1]

As Mister Gryphon, he bought the Stark Tower at Columbus Circle from Stark Industries.[2] When Gryphon was supervising the clearing of the ex-Avengers Tower, the Chitauri warrior Warbringer materialized from some of Qeng's employees, having used a cellular reconstitution process to transport his consciousness to the Earth and for a body with innocent people. Gryphon recognized the language Warbringer was speaking, and proposed to become his ally. Warbringer was ultimately convinced to gather the scattered pieces of an ancient powerful artifact. Gryphon teleported away after catching Spider-Man eavesdropping.[3]

Mr. Gryphon reappeared in the scene after a group of heroes had failed to stop Warbringer, and scolded them for property damage. He later followed Warbringer closely in his ensuing battle against these heroes, and even helped him by teleporting Thor's hammer away when it was about to hit Warbringer.[4]

After Warbringer got the Avengers off his back, Gryphon returned to help him gather the final piece from a cemetery in Hart Island. Once assembled, Gryphon informed the Warbringer of the object's ability to open a portal for an awaiting Chitauri armada. However, the heroes managed to get the artifact, whose pieces had already been assembled and separated once in order to summon the portal. The heroes were able to reconnect the pieces, force Warbringer through the portal, and destroy the object in a split second, thwarting the villain's plan. Before the plan was a success, Gryphon tried to use necromancy to turn the corpses of the graveyard into zombies that attacked the heroes, but failed.[5]

Those heroes remained together and recreated the Avengers. They finally learned of Mister Gryphon's true origins when they discovered him aiding Equinox.[1] In the middle of the fight, Gryphon managed to separate Thor from her hammer with the help of the Vision, who had been secretly reprogrammed some time earlier by him, sending her to the near future through a time portal. He planned to use the hammer's ability to manipulate time for his own gain, but he was stopped when Thor returned, having retrieved a version of her hammer found in said near future.

Iron Man had managed to reboot the Vision's programming and free him from Gryphon's control. When the Vision engaged against Gryphon, Thor used the power of the present and the future versions of her hammer to cast Gryphon away into the timestream.[6]

Seemingly those of the Nathaniel Richards of Earth-6311.

Seemingly those of the Nathaniel Richards of Earth-6311.

Like this? Let us know!
Retrieved from "https://marvel.fandom.com/wiki/Nathaniel_Richards_(Mister_Gryphon)_(Earth-6311)?oldid=5321741"
Community content is available under CC-BY-SA unless otherwise noted.