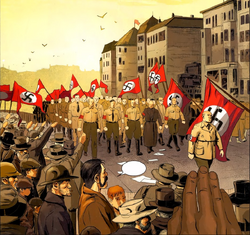 The Nazis were a group of fanatical Germans who attempted to take over the world during World War II. They took control of the German government during the 1930's and were led by a man named Adolf Hitler. The Nazi Party was a political party that rose due to the effects of the Great Depression, having antisemitic, anti-monarchist and anti-Marxist views, and believing in the superiority of Germans, whom nationalists claimed to be part of the Aryan “master race.” So they started to eliminate "inferior races," like the Jews, creating concentration camps designed to torture and extinguish them. The most famous and terrible of all was Auschwitz in Poland, where Magneto passed his childhood. They also sent many spies to steal American secrets or destroy them. They were stopped by Captain America and the Invaders. They also abolished the symbols of the Weimar Republic.

The Nazis possessed advanced technology, results of the experiments of three core Nazi scientists. The possibly greatest of these was named Arnim Zola, who specialized in conscience transference and the creation of artificial life. Another Nazi, perhaps as great as Zola, yet far more subversive, was Baron Heinrich Zemo. He specialized in laser technology and created an adhesive called Adhesive X. The most terrible, yet least devoted to the Nazi's cause, was a mutated geneticist named Nathaniel Essex a.k.a. Mister Sinister. Sinister only associated with Nazis so he could study the genetic potential of the so called "master race." He also wanted to collect DNA samples from prisoners in the concentration camps.

Like this? Let us know!
Retrieved from "https://marvel.fandom.com/wiki/National_Socialist_German_Workers_Party_(Earth-616)?oldid=6057285"
Community content is available under CC-BY-SA unless otherwise noted.