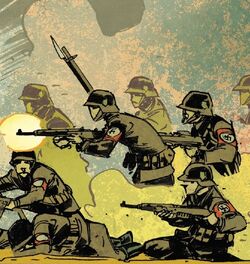 During World War II, a Nazi spy infiltrated the United States Army and murdered Morgan Erskine after she used sorcery to enhance the weakling Stephen Rogers into the magically-empowered warrior. As Soldier Supreme, Rogers jumped into the theatre of war led his unit, the Howling Commandos of Hoggoth, into battle against the Nazis. Years into the war, news reached Rogers that Hitler was dead.[1]

Retrieved from "https://marvel.fandom.com/wiki/National_Socialist_German_Workers_Party_(Warp_World)_(Earth-616)?oldid=5549001"
Community content is available under CC-BY-SA unless otherwise noted.