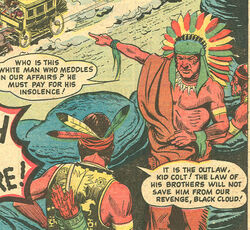 The Navajo Nation is the governing body of the Navajo Native Americans. The first Navajo were believed to have migrated into the south-west as early as 200 AD and expanded into the states of Arizona, New Mexico, and Utah.[1] Presumably, their history on Earth-616 mirrors that of their real world counterparts.

The colonization of the United States by European settlers caused great changes among the Navajo people. They often worked with or against settlers that were expanding in their region, occasionally fighting with or against such western heroes as the Black Rider, Kid Colt, and others, depending on their needs at the time. In later years many tribes strove for peace in order to prevent further bloodshed, but some renegade factions of the Navajo waged war against the white settlers.

One such renegade group of Navajo attacked a stage coach but were driven off by Kid Colt. Their leader Black Cloud sent his warriors Black Bear and Running Deer to capture Kid Colt. They tortured him and then eventually attempted to burn him at the stake, however Kid Colt broke free and sent them fleeing into a dead end valley where they were trampled to death by a herd of buffalo.[2]

The Navajo people continue to exist to this day.

Like this? Let us know!
Retrieved from "https://marvel.fandom.com/wiki/Navajo_Nation_(Earth-616)?oldid=5797109"
Community content is available under CC-BY-SA unless otherwise noted.