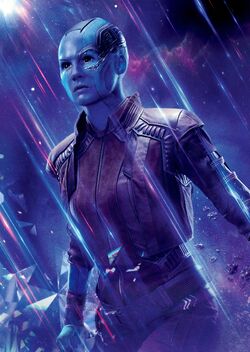 Nebula was raised by her adoptive father Thanos to become a consummate warrior and killer. She was frequently pitted against her adoptive sister Gamora in combat, but Gamora's determination to survive consistently saw Nebula suffer defeat, and with each failure Thanos would strip a piece of her away and replace it with machinery. This practice of hardening up the sisters served to foster a deep seated hatred for Thanos as well as jealousy felt towards Gamora.[4]

Nebula eventually became a useful asset for Thanos's schemes, and she and Gamora were both tasked with recovering the Orb of Morag for him. To this end they were sent to liaise with the power hungry Kree, Ronan, who had made a deal to trade the Orb of Morag in exchange for the annihilation of Xandar. When they received word that the Orb had fallen into the possession of a thief named Peter Quill and that Quill planned on selling the Orb on Xandar, Ronan volunteered Nebula to retrieve it. However, Gamora strongly insisted that she recover the Orb, stating that she knew Xandar better than Nebula. Though Nebula protested, Ronan agreed to send Gamora in her place.

Ronan was later contacted by the Other, who informed him that Gamora had been captured by the Nova Corps and sent to the Kyln with the Orb. Nebula and Ronan were then summoned to Sanctuary, where Ronan announced his grievances to the Mad Titan, and ended up killing the Other. Thanos him with death if he failed to return with the Orb, prompting Nebula to urge Ronan into action. They arrived at the Kyln too late however, and learned that Gamora and some others had already escaped with the Orb.

Ronan was eventually contacted by Drax, who told him that the Orb was on Knowhere. Nebula joined him in his next attempt to recover the Orb, and this led her to hunt Gamora in an aerial battle. Before destroying her sister's craft, she remarked that of all her siblings, she hated her the least. Though the blast didn't incinerate Gamora, it left her and the Orb floating in space, the latter of which Nebula retrieved.

After returning to Ronan's ship the Dark Aster Ronan discovered that the Orb contained an Infinity Stone and decided to keep it and betray Thanos. Now that Ronan's newfound purpose included killing Thanos, Nebula chose to side with him, stating that if he succeeded in killing her father she would help him burn a thousand worlds.

As the Dark Aster descended on Xandar, Nebula informed Ronan that a fleet of Ravagers were en route to intercept them. Nebula then ordered all fighter squadrons to deploy and attack. But even as the Nova Corps joined the battle, Ronan dismissed them as a threat, stating that none of it would matter once he won. Nebula then went to confront Star-Lord, Gamora, Drax and Groot. As she announced her disappointment in Gamora, her diatribe was interrupted by Drax, who blasted her with a cannon. Recovering, Nebula engaged Gamora in melee combat, but was ultimately overpowered by her sister and left hanging at the edge of a hull breach. Gamora offered to save her, but Nebula severed her left wrist and fell onto a passing Ravager ship, which she commandeered and used to flee the planet.[5]

Nebula was later caught and used as payment to garner the services of Gamora and her crew mates (now calling themselves the Guardians of the Galaxy) by the Sovereign. Having been turned over to the Guardians she soon found herself their prisoner aboard the Milano, as well as becoming a target when the Sovereign retaliated for a theft that one of the crew had conducted on their world. Nebula and the others survived the attack thanks to intervention from a mysterious benefactor, Ego, but that only prolonged her frustration at being cooped up with the argumentative group as their ship subsequently crash landed and they set about affecting repairs.

Their rescuer turned out to be Peter Quill's long lost father, who after explaining a little of Quill's heritage took Quill with him learn more, along with Gamora and Drax for additional company. This left Nebula in the care of Rocket and Groot while Rocket continued with the repair work. The remaining trio came under attack again, this time by Yondu Udonta's group of Ravagers who were intent on capturing the Guardians of the Galaxy. Despite Rocket's efforts to ward off the attack, Udonta was able to subdue him shortly before the Ravagers mutinied and moved to capture the remainder of Milano's crew along with Udonta. Nebula positioned herself outside of this arrangement, ostensibly siding with the mutineers, but only long enough to escape her predicament. She soon parted ways with the mutineers and set her sights back on Gamora, taking a Ravager ship to follow her sister to Ego.

Nebula caught Gamora alone on the small mysterious planet, and chased her with guns blazing straight into a tunnel mouth. She presently became trapped in the wreckage of her ship, and was rescued by Gamora, but used the opportunity to continue the fight and beat her. Claiming victory over her estranged sister gave her some of the satisfaction she had long sought, and actually outright stopped her from killing Gamora, but the pair were then faced with a new problem presented by the discovery of numerous skulls hidden in the caves that had evidently been left there by Ego. With her purpose to kill Gamora largely rendered obsolete, Nebula's only option was to follow her sister back the others when Gamora moved to warn them about what had been found.

When extent the threat posed by Ego had been pieced together, it became apparent that everyone involved was doomed to die. Nebula had no better option than to tag along with the others as they hatched an impromptu plan to try to combat Ego. They were aided by the surprise arrival of Rocket, Groot, and Yondu in a Ravager mining craft, and Nebula found herself teamed up with her estranged sister as they battled deep within the planet against the very planet itself. She fought valiantly alongside the Guardians, working closely with Gamora to achieve victory. For her efforts Gamora later offered her a place among the group, but Nebula declined the offer wanting to pursue her personal vendetta against Thanos instead.[4]

Sometime later, when Nebula snuck on board Thanos's ship to kill him, he caught her and held her hostage in a torture chamber. Bringing the kidnapped Gamora, Thanos used the Power Stone to torture Nebula to force Gamora to reveal the Soul Stone's location. When Thanos and Gamora departed for Vormir, Nebula escaped her prison and hijacked a ship to make her way to Titan, informing Mantis to have the Guardians rendezvous with her there.

Nebula then arrived on Titan and helped the Guardians and Avengers battle Thanos. When the heroes managed to restrain Thanos, Quill asked Thanos of Gamora's whereabouts, but Nebula soon realized that Thanos had killed Gamora. Quill attacked Thanos in rage, ruining the plan and leading to Thanos counterattacking. After a grueling battle, ending with Thanos claiming the Time Stone, Nebula could only wait for Thanos to claim the Mind Stone on Earth. Soon, Nebula and Tony Stark were among the survivors of Thanos's Blip.[2]

Stranded, Nebula and Tony left Titan on the Guardians' ship. The ship ran out of food, oxygen, and fuel, but the two were rescued by Carol Danvers, who took them to Earth. As Stark was in no condition to help, Nebula helped the Avengers track down Thanos to his hiding place, the Garden. The Avengers, seeking to find the Infinity Stones to reverse Thanos's snap, found that Thanos had destroyed the stones, leading to Thor Odinson killing Thanos.

The Avengers spent the next five years mourning the fallen and trying to move on until Scott Lang escaped the Quantum Realm and realized that they could time-travel to reclaim the Infinity Stones from the past. After reassembling, the Avengers built a time machine, intent on claiming the Infinity Stones to reverse the snap. Nebula joined War Machine, Black Widow, and Hawkeye in traveling to 2014, where Nebula and Rhodey went to claim the Power Stone while Romanoff and Barton went to collect the Soul Stone. Nebula and Rhodey were successful in getting the Power Stone after knocking out the past Star-Lord, but Nebula's time-traveling caused her to synchronize with her past self, alerting the past Thanos of her actions. The past Thanos abducted Nebula and had her past self impersonate her to infiltrate the Avengers, seeking to claim the Infinity Stones. However, after reasoning with the past Gamora, Nebula broke free and killed her past self. Nebula then fought in the Battle of Earth and eventually joined the Guardians.[6]

Cyborg Body: Nebula's body has been systematically torn apart and replaced with machinery. Much of her skeletal structure includes some degree of technology supporting her musculature, and her left arm is almost entirely robotic. Nebula's voice is also rendered in a synthetic quality.

Like this? Let us know!
Retrieved from "https://marvel.fandom.com/wiki/Nebula_(Earth-199999)?oldid=6189129"
Community content is available under CC-BY-SA unless otherwise noted.