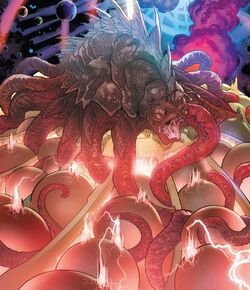 Nebulon was a member of the alien Ul'lula'ns, a race of six-tentacled, finned, water-breathing non-humanoids, who had begun to deplete the mineral resources of their home world. To remedy the situation, the Ul'lula'n High Tribunal dispatched an undisclosed number of prospectors to locate and secure worlds with the appropriate mineral resources for the race's survival. Possessing vast biosphere-tapping power and able to assume other forms, Nebulon took a glistening golden humanoid form when he neared star systems with humanoid populations.[citation needed]

He was not, however, particularly successful at prospecting. Happening upon the misanthropic Hyperion of the Squadron Sinister, who had been imprisoned by the thunder god Thor in a glass sphere floating in space, Nebulon rescued him, and told him of his mission. Hyperion, eager for vengeance against the people of Earth for the imagined destruction of his world, offered to let Nebulon have Earth.[4] Unaware of the alien's true form, Hyperion directed the Ul'lula'n to Earth and had him re-organized Hyperion's one-time comrades, the Squadron Sinister. Nebulon wished to take custody of the world with all of its land masses completely submerged underwater. To effect this, the Squadron members pooled their resources to create a powerful laser cannon capable of melting Earth's polar ice caps. The Squadron member Nighthawk was an unwilling accomplice to the proceedings, however, and took the first opportunity to summon help.[5]

Contacting the Defenders, Nighthawk outlined the nature of the crisis. The Defenders swiftly traveled to Earth's North Pole and engaged the Squadron in battle. In the course of events, Nebulon expended so much energy that he lost control of his humanoid form and allowed his allies and enemies to see his true form, a sight that dismayed even his allies. Nighthawk seized this moment of confusion to train the laser cannon on Nebulon. The cannon's power was beyond Nebulon's capacity to absorb in his weakened state outside water, and he seemingly imploded, taking along his three Squadron accomplices.[4]

In actuality, Nebulon dispatched himself to the aquatic extra-dimensional world called Zaar, inhabited by a race of philosophers called the Ludberdites. The Ludberdites explained to Nebulon the essence of their philosophy, that it is the obligation of higher beings to improve the lot of their inferiors. For unknown reasons, Nebulon took this philosophy to heart, severed his loyalties to his people, and abandoned his original mission to undertake a new one: saving the beings of Earth from their own innate foibles.[3] Returning to Earth, Nebulon had the Ludberdites kidnap humans as samples so he could assess their common concept of peace.[6] He then assumed a less-imposing human guise than before, and started a movement called Celestial Mind Control which promised to liberate the powers of the human mind, but actually robbed its practitioners of their free will.[3]

As Nebulon began to spread his movement across the world, the Defenders became aware that he was its founder and tried to thwart him. Nebulon was forced to dispatch some of the Defenders to another dimension at one point to prevent their interference.[7] At the same time as Nebulon's movement became worldwide in scope, the Headmen, a group of renegade scientists, undertook their own scheme to gain worldwide political power. Soon Nebulon and the Headmen found themselves working at cross purposes. After months of effort, the Defenders managed to expose the Headmen's political machinations and to convince Nebulon it was a hopeless task to force humanity to better itself. Nebulon abandoned his mass movement and disappeared.[2]

When the Tribunal of Ul'lula'ns learned of Nebulon's interference in Earth culture and abandonment of his mission, it tried and convicted Nebulon for treason against his race. But before he could be taken captive, Nebulon fled into Earth's ocean where he used his shape-changing abilities to assume the form of Lady Dorma, the deceased bride of Namor, the Sub-Mariner, prince of Atlantis. Convincing the Atlanteans that Dorma had survived, Nebulon used her popularity as well as his own powers to convince the Atlanteans to attack London. The Defenders got involved since the Sub-Mariner was one of their members, and uncovered Nebulon's deception. Soon afterward, an Ul'lula'n star craft appeared, and took custody of Nebulon. Nebulon was sentenced to be stripped of half his biospheric power, entrapped within his humanoid form, and exiled on Earth. The Tribunal suggested that Nebulon commit suicide, the honorable alternative to disgrace according to their culture, but Nebulon refused.[citation needed]

Learning of Nebulon's dishonor, Nebulon's wife Supernalia traveled to Earth to force him to take the honorable action. Nebulon had in the meantime wheedled his way into the ranks of the hero team Avengers, with the hidden goal of using his technology to siphon from them the power to replace that which he lost. To combat her husband and his powerful allies, Supernalia enlisted the aid of the Defenders, her husband's longtime foes, and soon the two teams of champions were manipulated into battle. By the time Nebulon's motives were revealed, the Earth heroes were already being drained of their energies. Supernalia was made to realize that her actions on Earth also constituted a violation of her people's ethics, and so she chose to commit suicide. In trying to stop her, Nebulon fell victim to the same energy-draining ray that was killing his wife. As Nebulon died, he admitted that at last he was acting honorably. The Avengers and Defenders buried the aliens where they died, in the snowy mountains of the Himalayas.[citation needed]

Nebulon's soul ended up in Hell, where he made acquaintances of two lesser demons named Mog'rys and Borss. As part of a deal with Mephisto, Mog'rys and Borss bestowed their power to Nebulon and returned him to the physical plane, where he invaded the Train, a primordial engine of planetary proportions that pulled the planets in its path into its orbit. Using a humanoid form, Nebulon moved from world to world on the Train, murdering the mortal servants and facilitators of the Train's driver, the Conductor. After revealing his true form, Nebulon attached himself to the Conductor's mind and exterted his will to shift the course to Earth to destroy it.[8]

Galactus and the Silver Surfer stumbled into the Train[9] and eventually discovered Nebulon's influence. The Silver Surfer tried to stop Nebulon, but was no match for the monster's new demonic power. He was then joined by Namor, who had been rescued by the Silver Surfer's Surfboard from Vodan, one of the planets pulled into the Train. In an alternate future, Galactus destroyed the Train to thwart Nebulon's plan, but the residual radiation from the explosion doomed the Earth either way. The Doctor Strange from this timeline jumped back in time to prevent Earth's destruction, and brought the Hulk to the Train as plan of his plan. Since the Surfer's board disrupted Nebulon's ectoplasmic essence, Hulk used it to bludgeon the monster. Meanwhile, Strange used his astral form to slip into the Conductor's macro-mind, exerting all of his will to induce a spasm on the giant, causing him to jerk his wand and fling the planet on its grasp, Vodan, back into space. This movement caused the Train to shift a fraction of a degree. At the speed and distances involved, this was enough to set the Train off course and miss the Earth. Since this caused the deal with Mephisto to fall through, the Hell lord appeared and claimed the souls of Nebulon, Mog'rys and Borss.[8]

Nebulon possessed a number of super-humanoid powers which drew upon a planetary bioshpere's energy. Nebulon could manipulate energy for a variety of effects, including the creation of spheres, shields, or energy blasts. The amount of concussive force is not known, but it had proved sufficient in staggering even the monstrous Hulk. Nebulon could also teleport across the surface of a planet and between dimensions. Since his powers derived from the life-energy of a world, they waned whenever he was no longer in proximity to a planet. He could shrink objects to tiny size.[3]

Nebulon also possess the ability to shape-change into virtually any form. Because the transformation process was so strenuous, Nebulon did not undertake it often. In his golden humanoid form, Nebulon possessed incredible superhuman strength, speed, and reflexes. Nebulon was strong enough to stop the Hulk's punch with one hand.[3]

Like this? Let us know!
Retrieved from "https://marvel.fandom.com/wiki/Nebulon_(Earth-616)?oldid=5721441"
Community content is available under CC-BY-SA unless otherwise noted.