The millenia old Nega-Bands were powerful relics of the Kree Empire. Transforming mental energy into physical energy, the Nega-Bands are able to grant the wearer fabulous powers.[1]

Captain Marvel's children Genis and Phyla-Vell also wielded a set. A fourth set, possibly Mar-Vell's original pair, were stolen by the Shi'ar in order to create the Nega Bomb which, under influence by the Supreme Intelligence, they sent to devastate Kree Space. A fifth set was acquired by the Skrulls and give to Khn'nr who was to insert himself into the superhero population as a time lost Captain Marvel, the location of these nega bands after his death has not been revealed.

The ore of the Mar-Vell's bands were repurposed by Hulkling into wedding bands for him and his husband, Wiccan.[3]

Dr. Hank Pym once created a pair of Nega-Bands, but they were apparently destroyed in an explosion.[4]

Lord Annihilus stumbled across a pair of his own Nega Bands which he used as a means of creating another breach from his domain into the positive matter universe.[5] Using one band in each opposing space to act as a target waypoint from which to shoot through using his Positron cannon, a device which was revealed to be powered by the second band as they could channel matter and antimatter to be used both as a power source and firing mechanism.[6]

Yet another pair of bands pertaining to unknown origins once belonged to a corpse found on the Milano, a Raptor ship stolen by The Guardians of the Galaxy.[7] An enclave of the Fraternity came to retrieve their prize, led by Talonar, but came into conflict with Star Lord after he poisoned Rocket.[8]

Robbie/Talonar had sought out the Nega Bands specifically for their ability to open trans-dimensional shunts in order to get to and from different points in space.[9] Having finally acquired them after his run in with an Ultron infected cluster of space where Quill deposited the other half of his prize, he studied and experimented with the Kree magitek weaponry for months after their acquisition.[10] trying to open a gateway to Null Space where the Tree of Shadows resides, in order to access the Darkhawk Drone technology; but to no avail.[11] Until eventually succeeding by traversing to a Shi'Ar Outpost IV in a bid to monopolize a wearied spot in the fabric of reality in order to reach the True Raptors with them.[12]

The Kree Nega-Bands were classified by the Initiative as Omega Class Weapons, at the level of the Tactigon.[13] It was later revealed that while the bands do work without their mate, users will only possess half their functionality with only one band, their power often cutting out while the other is in use. It was also revealed they can open gateways to and from different points in the universe.[14]

The Nega-Bands will automatically adjust their size to perfectly fit their wearer. The Nega-Bands are also able to transform the mental energy of the wearer into physical energy[1] granting the users enhanced abilities including: 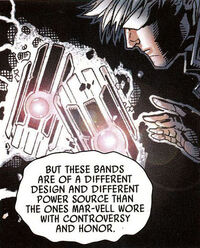 A new set of Nega-Bands, different in power and appearance, were created specifically by the Kree of Noh-Varr's universe to protect Earth.

Noh-Varr's Nega-Bands were taken away and destroyed by Ronan the Accuser after Noh-Varr turned on the Prime Universe's Supreme Intelligence.[18]