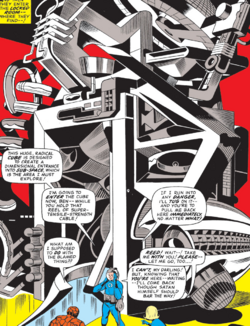 This huge, radical cube was designed by Mr. Fantastic to create a dimensional entrance into sub-space. Reed Richards first entered the Negative Zone attached to a reel of super-tensile-strength cable held by the Thing Impostor, who then sacrificed himself to save the superhero scientist and bring him back to the positive matter universe.[1]

When Sandman attacked the Fantastic Four, Reed Richards opened the portal again, forcing the villain to flee, even though the superhero was sucked into it and soon found himself floating free through the Negative Zone, much to everyone's horror.[2] He was eventually rescued by Triton, who crossed six safety chambers and jumped into the Negative Zone portal, saving him just moments before Reed was destroyed at the barrier. Unknown to them, Blastaar freed himself and traveled into the positive matter universe with them.[3] After a week of work, Reed and Ben Grimm removed a power core, in order to prevent any other alien entrance.[4]

Some time later, as Rick Jones, assisted by Captain Marvel, jumped out the Negative Zone, he also inadvertently released Annihilus as well, who was forced back into the Negative Zone Portal by the Avengers.[5]

Like this? Let us know!
Retrieved from "https://marvel.fandom.com/wiki/Negative_Zone_Portal?oldid=6430801"
Community content is available under CC-BY-SA unless otherwise noted.